This post contains seven examples of the differential operator named curl. The motivation for this update lies in the fact that after my humble opinion inside the set of equations known as the Maxwell equations there is a tiny fault: Rather likely electrons carry at least a net magnetic charge.
And because they carry net magnetic charge they not only accelerated by electrical fields but also magnetic field.

If you have an old television set with one of those fancy tubes that contain one electron cannon for a black & white television and three electron cannons for a color television. With the help of a stack of these strong neodymium magnets it is easy to give experimental proof that the electrons indeed get accelerated… Why in the course of over one hundred years not one of the professional physics professors has done this is unknown to me; may be it is the separation of ‘theoretical professors’ versus ‘experimental ones’ a reason for this omission. May be it is the use of dogma (unproven things that live inside a belief system, in this case the belief system that magnetic monopoles do not exist).

Anyway the Maxwell equations contain a lot of the curl operator, that is not needed per sé but it makes the formulae look sleek and short. Originally Maxwell had a set of like 20 equations or so while at present day only four remain. But if you see those four equations for the first time it is very impressive, only over time you get used to it.

This post is 13 pictures long, size 550 x 775 pixels.
I start with examples that are as simple as possible and very slowly bring in a bit more abstraction.
Therefore I hope it is very readable, have fun with it! 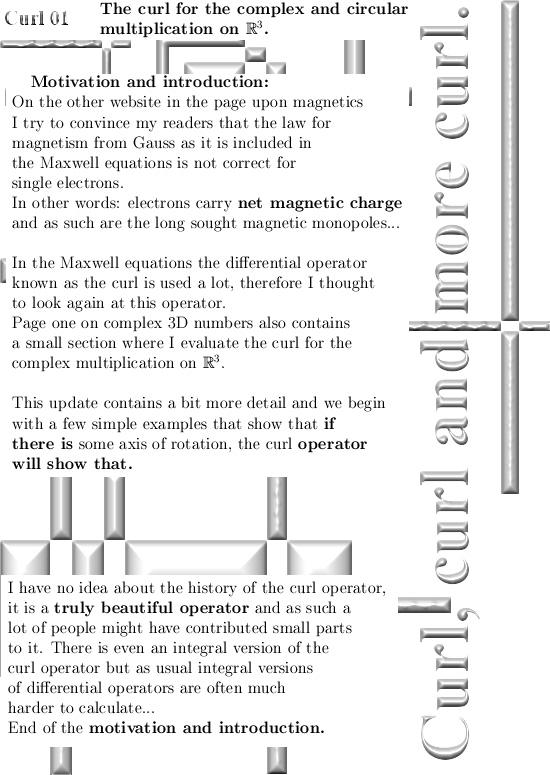 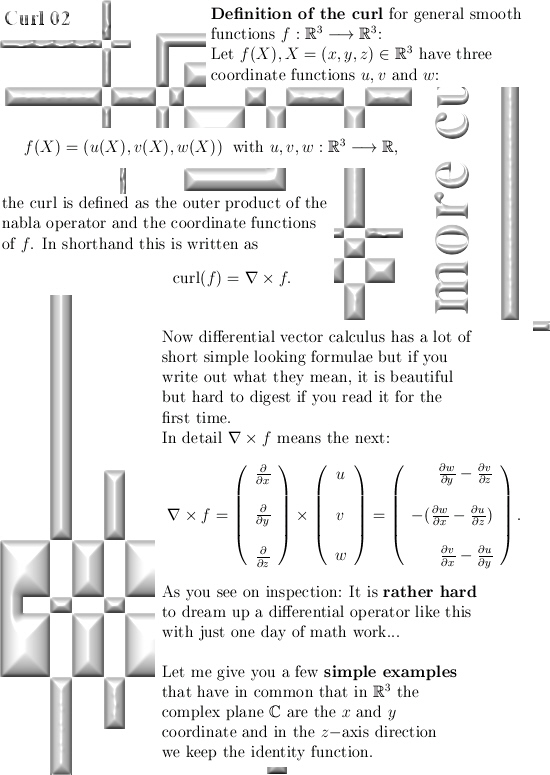 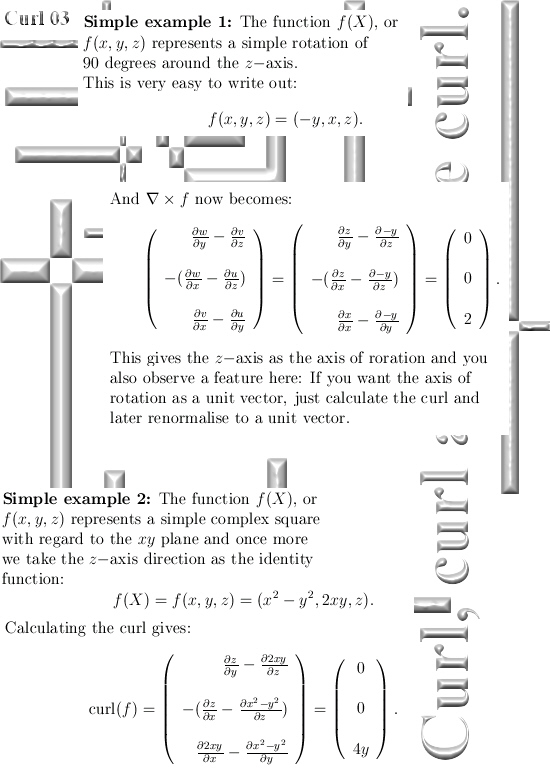 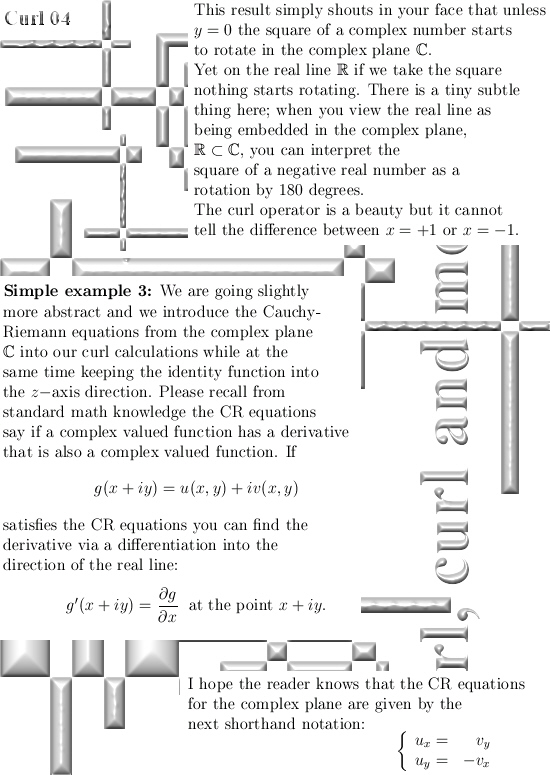 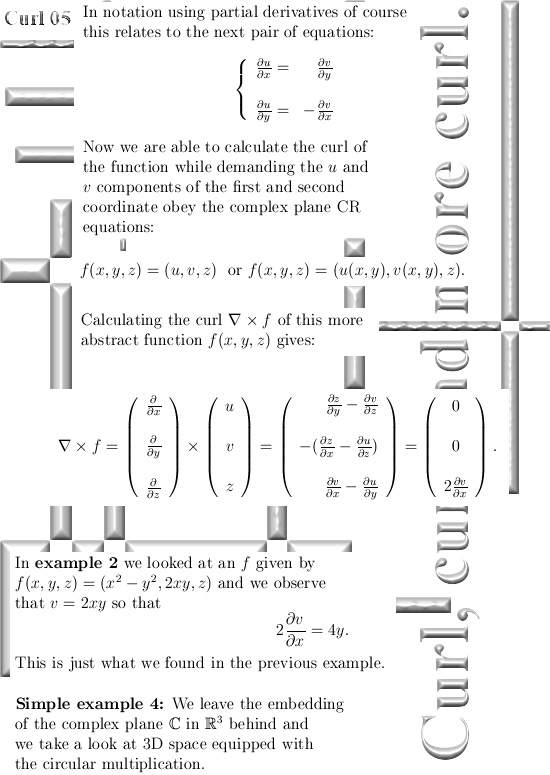 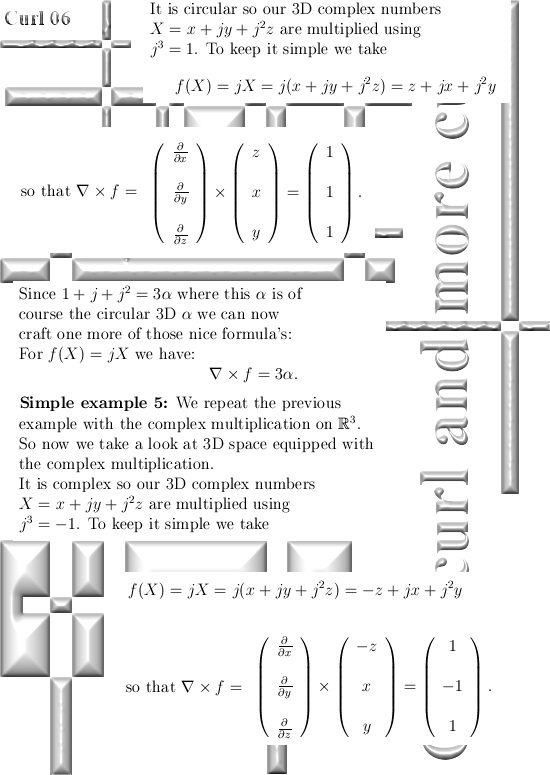 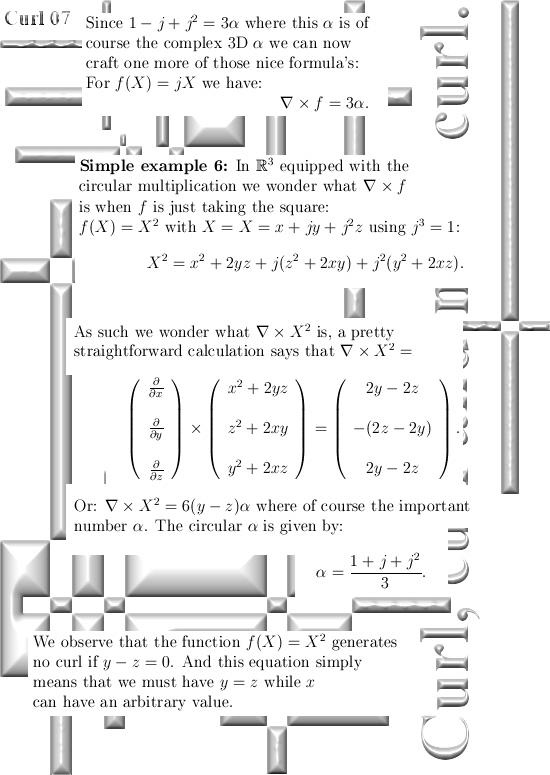 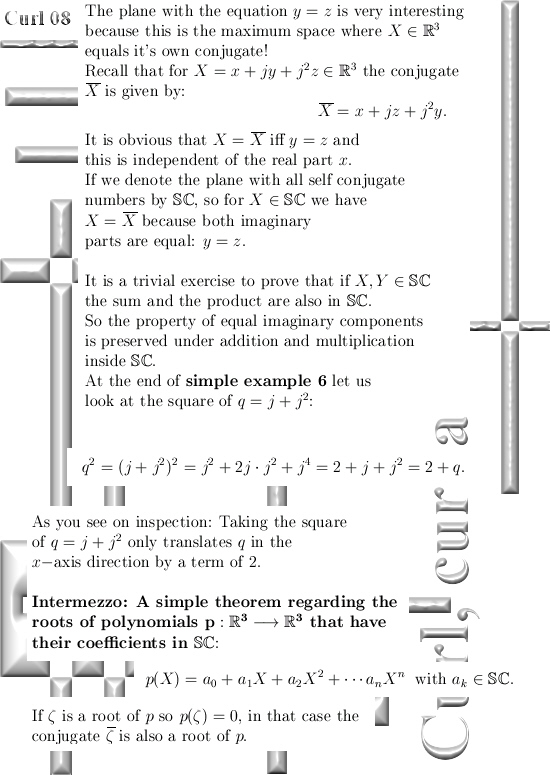 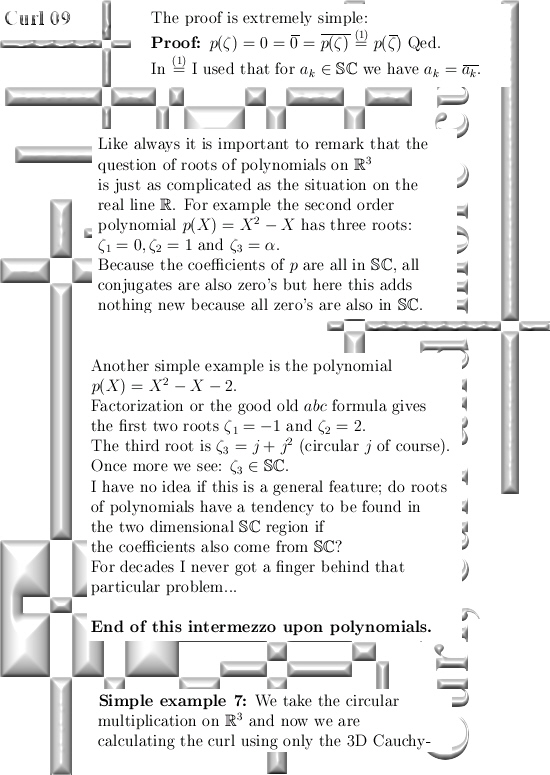 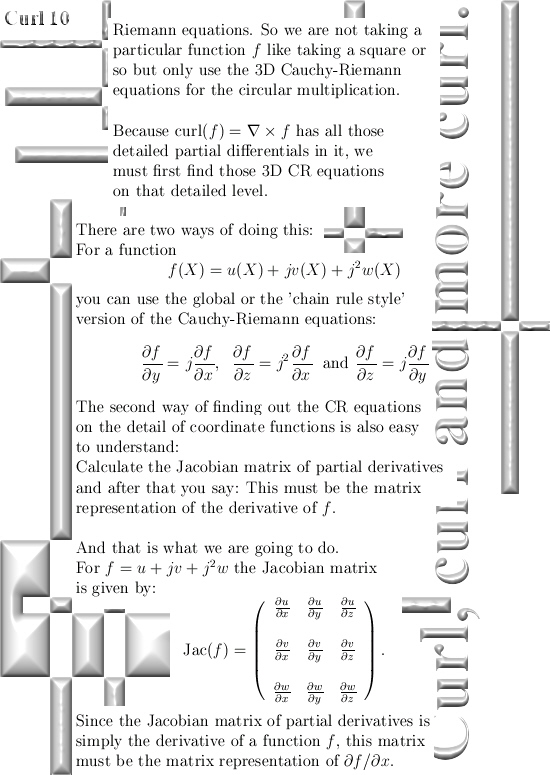 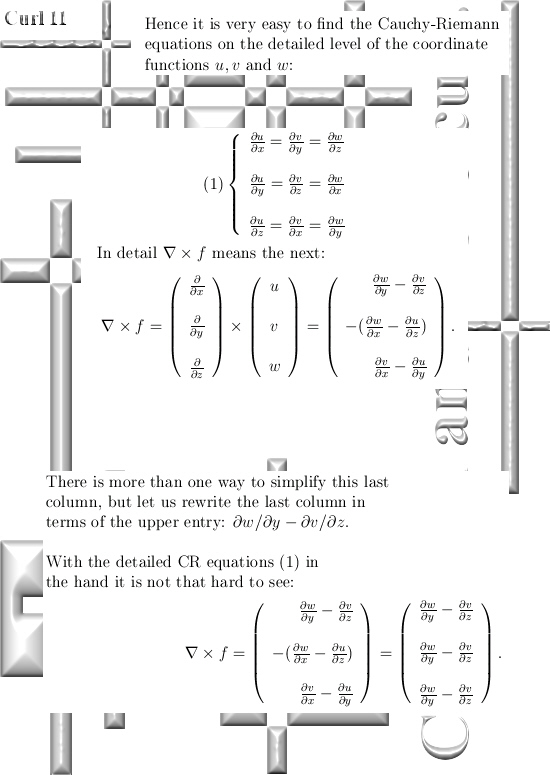 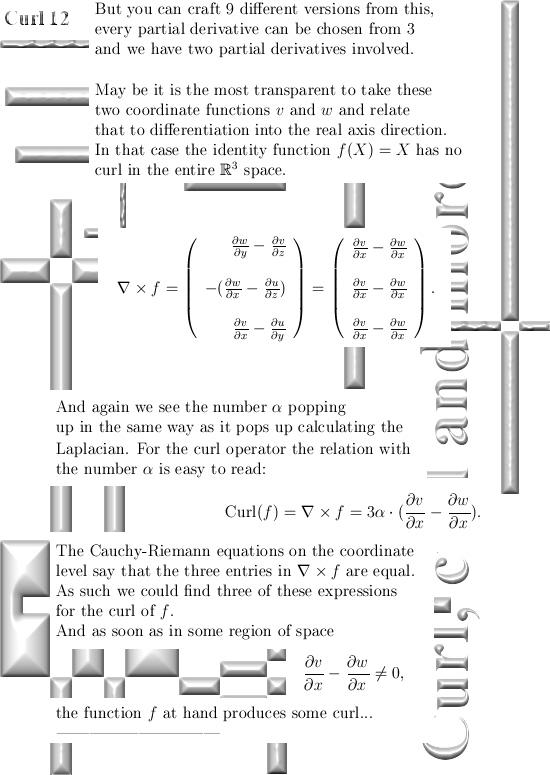 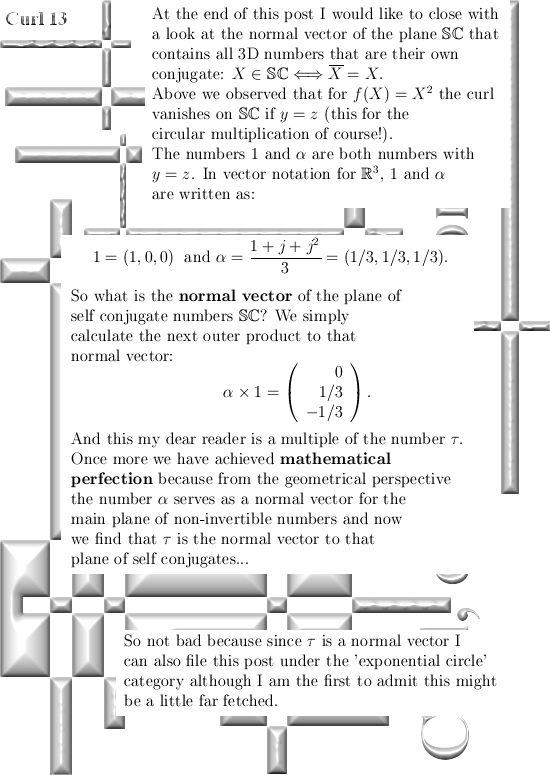 As far as I can remember, in the first year I opened these investigations into higher dimensional number systems again I calculated the curl for the complex multiplication in 3D space. In this post we only looked at the circular version of stuff.

But I can´t find it back so I cannot place a hyperlink to it.

Anyway, here is a nice wiki with the curl expressed as an integral (often much harder to calculate but nice to observe it can also be done that way):

And because this post was motivated by all that curl in the Maxwell equations, I tried to find back when I originally started writing about electrons having magnetic charge instead of being magnetic dipoles like they are tiny bar magnets. It was 29 April that inside the math pages I found the first update on that. Here it is:

From 29 April 2014 : Do electrons have spin?
http://kinkytshirts.nl/rootdirectory/just_some_math/3d_complex_stuff02.htm#29April2014

Ok, that was it. Till updates my dear reader.

In the post on the factorization of the Laplacian from 5 August I made two rather stupid ‘cut and paste’ errors. But since this particular calculation is definitely inside my own list of top 10 magnificent calculations I decided to make the correction also a separate post.

That is only to show how important I rank this particular calculation; it should be posted flawless and not with stupid typo’s on stupid places…

Here is a picture showing the stupid ‘cut and paste’ typo’s and the corrected calculation as it should have been on 05 Aug of this year: 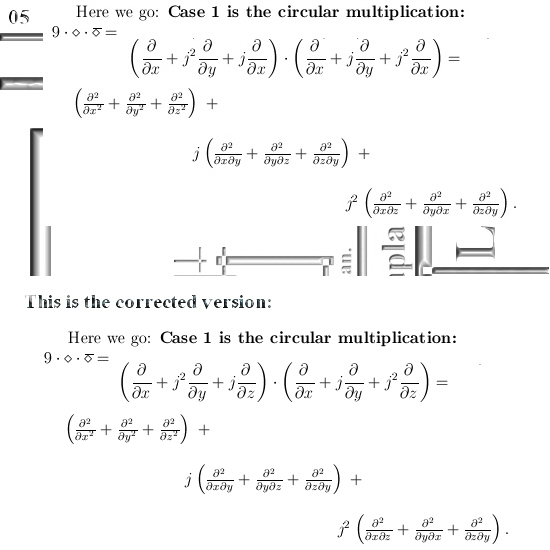 As you see on inspection: Only the top line is wrong so in practice it is not a big deal.
But this particular calculation made me understand the importance of studying more and more of the sphere-cone equations so I want this to be tip top & as perfect as possible.

Bad news from the Dutch university of Leiden.

For the pictures on my website I rely on that so called WIMS collection of packages. I first found it at some French university but later it was found out it was also stored in my home country at the university of Leiden.

Yesterday when I needed just one new picture I found out the university of Leiden has removed this collection of math packages. Why they have done this I do not know but in my life from experience I know that by definition all university people are full of shit.

Now at date 25 Sept 2016 I once more understand I was stupid to rely on a service done by university people; in the end they will always fuck you in the ass. How could I have been as stupid as to be dependent for my graphics to depend on university people?????

Of course the university of Leiden offers me an alternative route: Go back to France where the whole thing is still online. Now just look at these perfect images as they come back from France (this is the equation for the top picture on this website on 3D complex numbers: 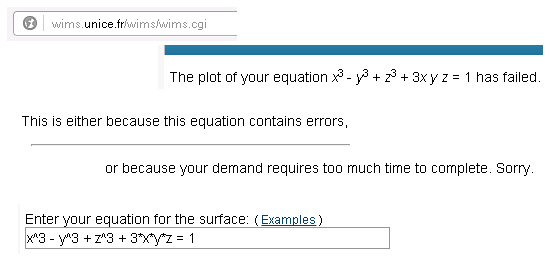 Once more we observe: If it works at an university it is just so full of shit that you cannot measure the amount of shit in that particular person before or after a toilet visit… Back in the year 1992 I decided that a professional academic career was not my path of life, now 24 years later this is once more validated. Better avoid all contacts with weirdo’s like that…

Over on the other website I posted two more reasons as why electrons simply have to carry a net magnetic charge.

Reason number 34 is about two more or less famous physics professors telling acute nonsense when it comes to electron stuff. You can find it in the next link:

Reason number 35 is about explosive discharges in the field of nuclear plasma physics; professional plasma professors just do not understand their own line of work. Any idiot can find out that electrons are accelerated by magnetic fields but since all people working at universities are full of shit they are blind for the obvious facts of life.

New reasons for electrons carrying magnetic charge are in the making, here is a picture I will use in explaining the so called ‘bonkers force’: 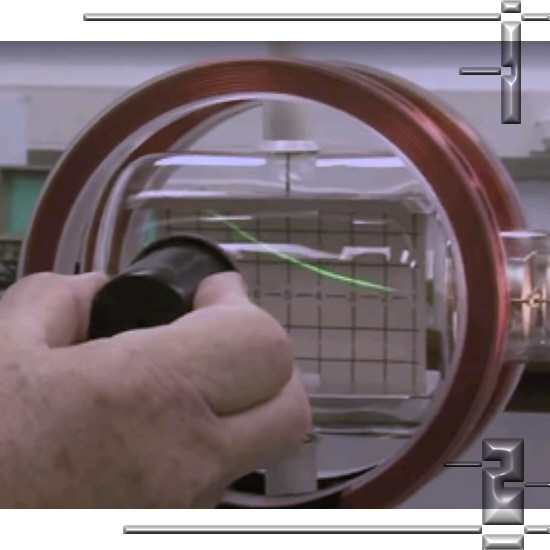 The bonkers force is perpendicular to the Lorentz force.

You might wonder why this is named a ‘bonkers force’?

The answer is simple: It will make professional physics professors go bonkers.
And that my dear reader is a good thing, till the next post on the curl of vector fields.

I know I know, not posted much around here lately.
And on top of that I found some serious typo’s in the pictures from just two posts back: the post upon the factorization on the Laplacian operator.

These typo’s are rather serious; we just cannot have all those wrong and misleading differentiations going not repaired.

But reparation of old faults is time consuming.

On the other hand, the curl operator has a lot of fresh new insights in simple number systems like the 2D complex plane or my own hobby; the 3D complex number system. 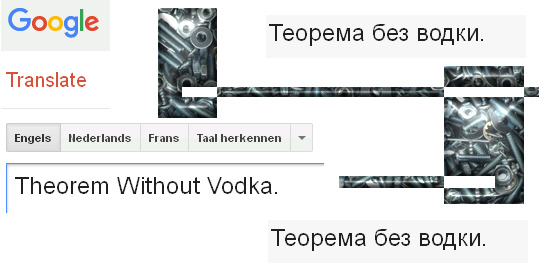 May be I just leave it out, after all this is supposed to be an update on the differential curl operator.

I am going to make this update on the other website so in about one week you can check it out on page 4 of the 3D complex numbers. I admit I have been lazy the last month but now I have stopped smoking over three years my health is still improving so I am more exploring the environment with my bike while I can do that again…

Ha! At my worst about four years back I could only walk 100 to 125 steps and after that I needed to pause 3 to 4 minutes because I got camps in one of my legs. So it finally dawned on me I had to stop this nicotine addiction because the next phase would be a wheelchair combined with an oxygen mask and a tank of high pressured liquid oxygen on the back of my wheelchair.

Looking back I am glad I got so ill because without it I would never have managed to stop smoking those ridiculous amounts of cigarettes day in day out.

Sorry to bother you with my past health problems, this new teaser picture is rather funny and I hope also intriguing: I have crafted three coordinate functions x(t), y(t) and z(t) and if you differentiate them with respect to the time t you get a 3D square of the vector (x(t), y(t), z(t)).

So check it out for yourself; take the derivative of the three coordinate functions and see if you can get the three equations as on the bottom of the teaser picture…

The new update (on the other website) is ten pages long meaning it is 10 pictures of size 550 x 1100. Click on the teaser picture to land on the new update: 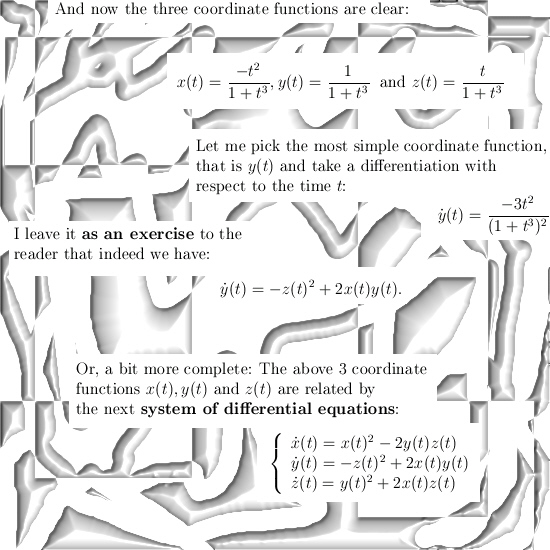 For me it is just so cute: If you differentiate to time you get the square of the position you are in the 3D complex number system.

I also made a teaser picture for use on the other website, it is the same solution to the simple differential equation as above but this time I solved it inside the complex plane. Of course I could not use that on this website as the first teaser picture given the face we more or less always try to focus on the 3D complex & circular number systems… 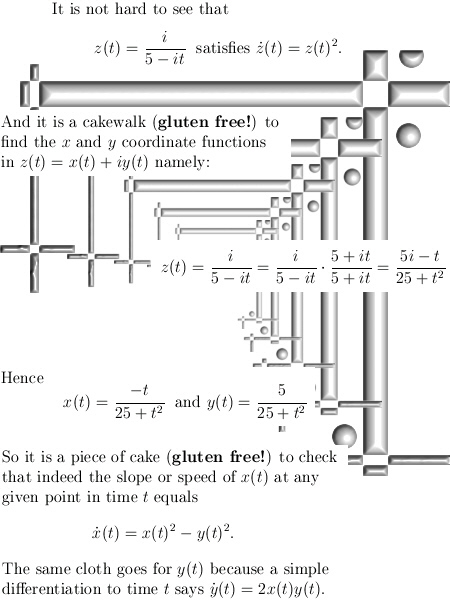 Ok, end of this post.
And life, as usual life will go on.