Update from 30 Nov: My health problems persist, my right wrist is still swollen and hot all the time. So after one week it is clear I need to see a doctor…
Anyway I can type text with one hand so here we go:

In this update I talk about the circular plane because I want to use the same language in 2D as in 3D or higher, yet for those living in the mud this stuff is mostly named split complex numbers. There are more names going round: for those people that do not understand what the conjugate of a number is and how to find those, they name it hyperbolic numbers.

This update is about finding the log of the first and only imaginary unit of the circular (also named split or hyperbolic) numbers. This mathematical goal can only be achieved by replacing the real scalars in the circular plane by numbers from the complex plane.
That replacement stuff is known in my household as the Sledgehammer Theorem, this theorem says you can more or less always replace scalars by higher dimensional numbers. But this has to make some sense; for example you have a number from the complex plane like z = a + bi, now if you replace the two real numbers a and b with general numbers from the complex plane you did not gain much.  As a matter of fact you gained nothing at all because you are still inside the complex plane and other people will only laugh at you:

For myself speaking I do not understand that a math result as in this post is more or less unknown to the professional math community. How can it be that Euler has all that stuff of finding the God formula while century in century out the math professors make no progress at all?

Every day I am puzzled by this because I am not ultra smart or so, it is only my emotional system is a bit different: I never get scared when hunting down some good math…

Anyway from the mathematical point of view I am proud of this ten picture long update: it is as close as possible to the calculation that unearthed the very first exponential circle. That was the discovery that in the complex plane the log of i is given by i pi over 2. 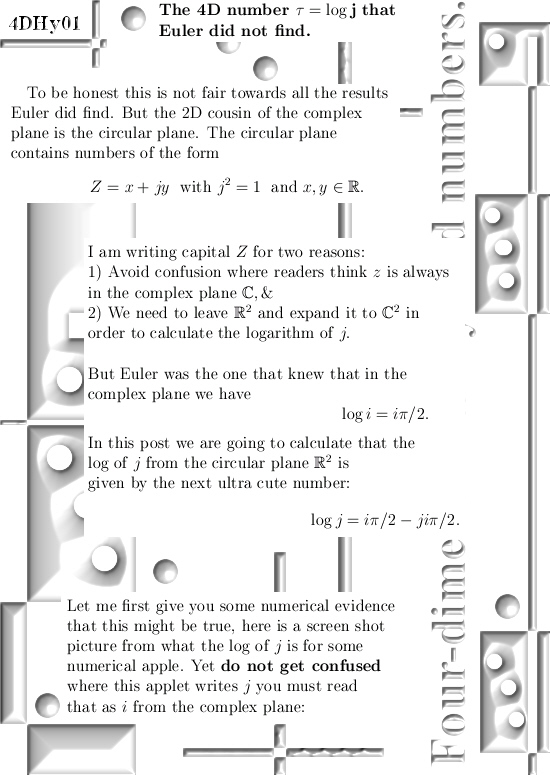 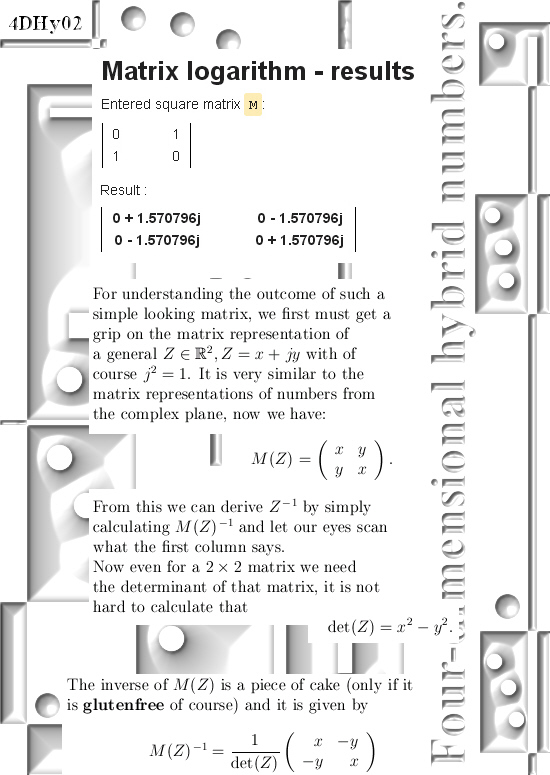 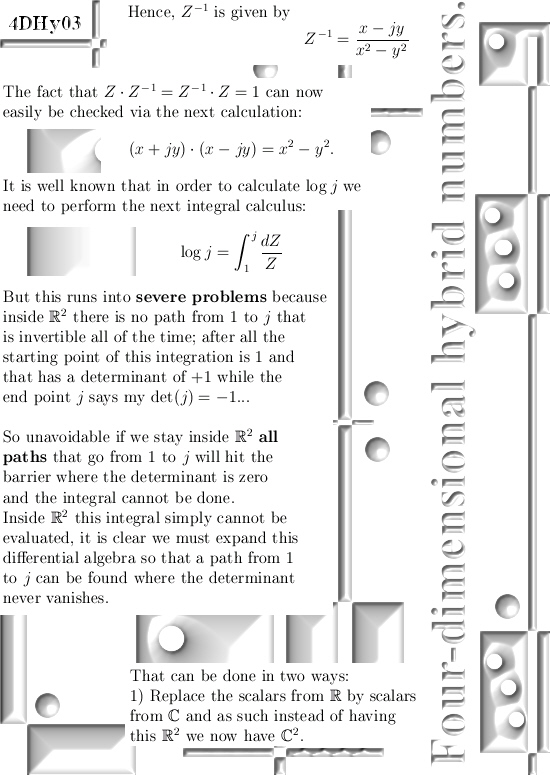 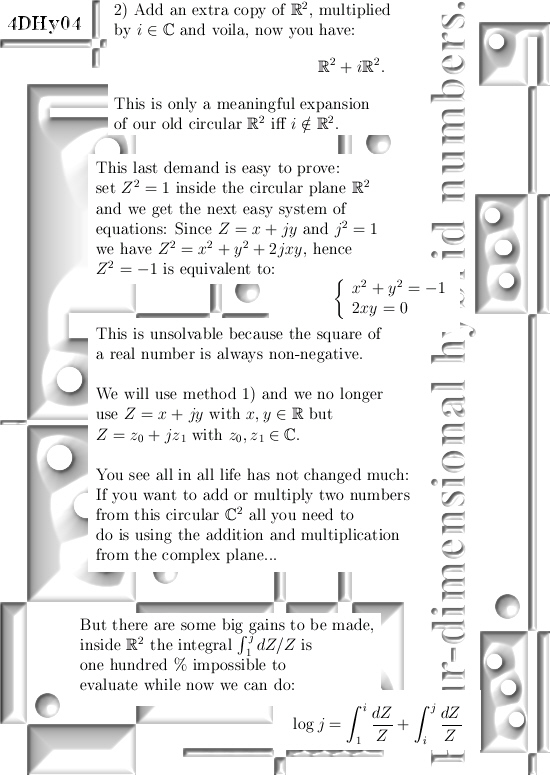 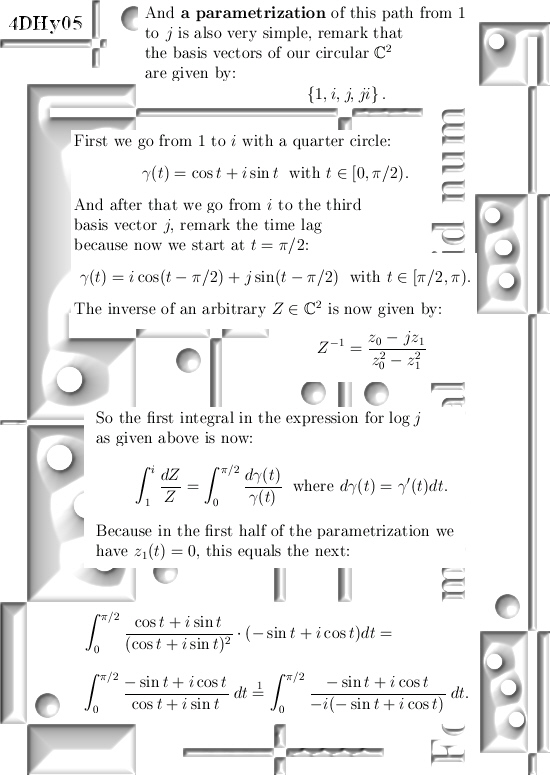 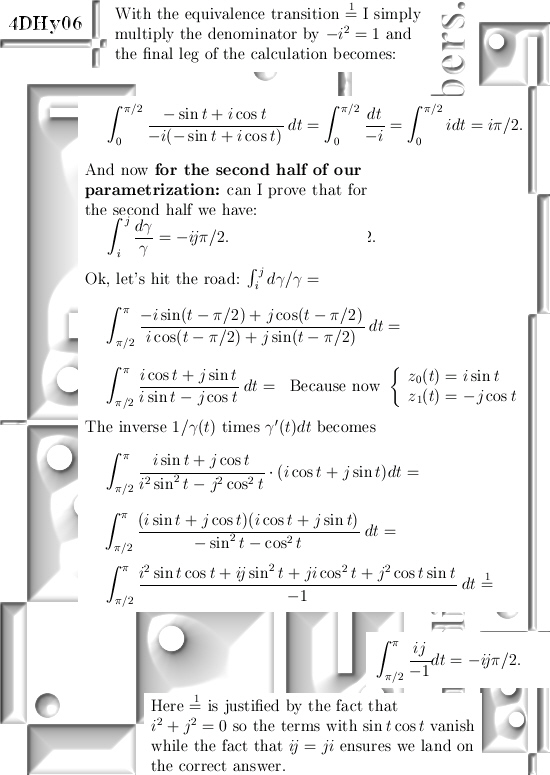 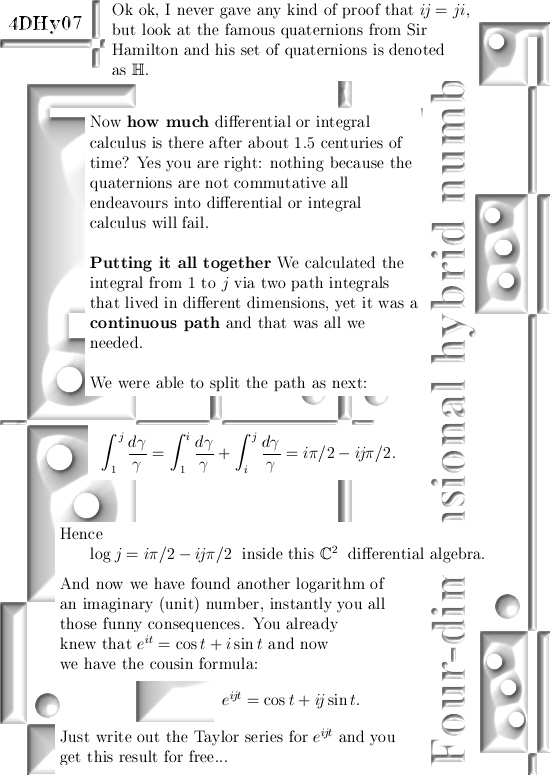 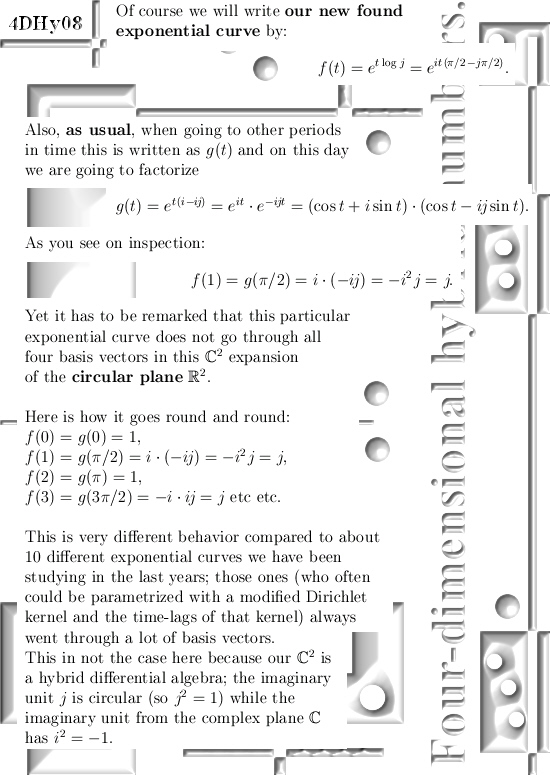 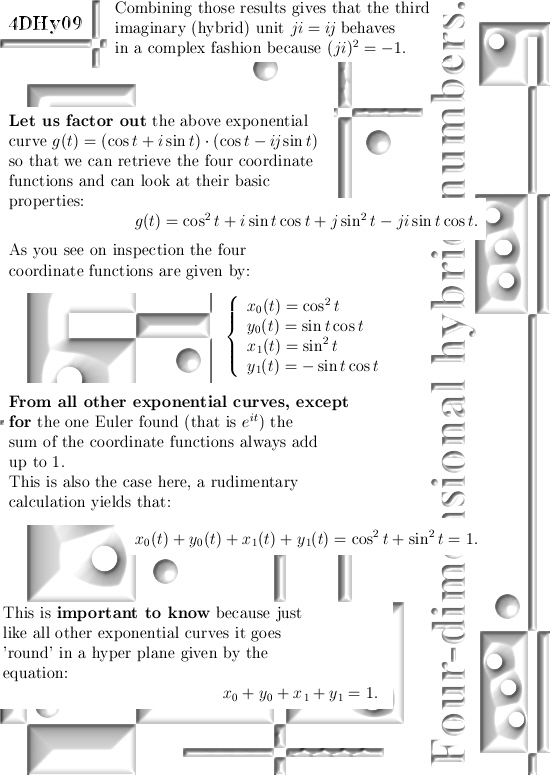 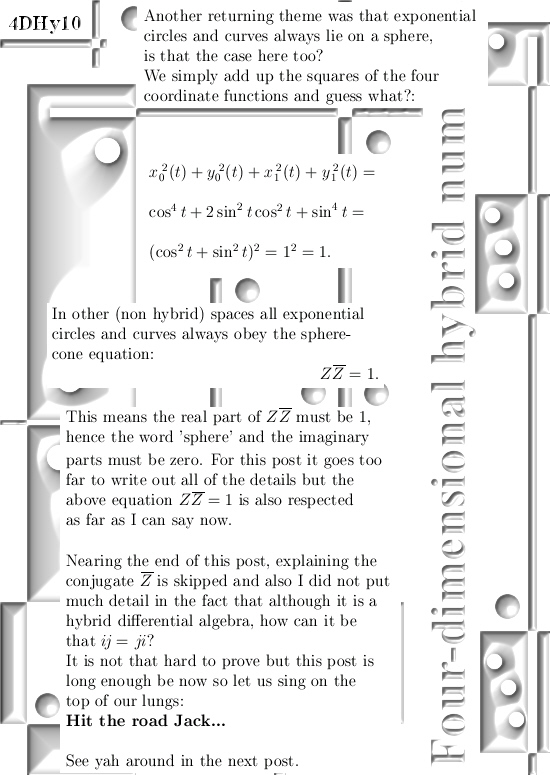 Need a cold shower by now?

Want to restore your faith in the old masters with their superior use of math?

Try the next video from the Youtube channel, it only uses insights from the circular plane and he runs fast and far: The Lorentz boost inside special relativity:

Let’s leave this update with that, have a good life or try to get one.

Update from 04 Dec 2016: I would like to post the number one wiki when you do an internet search of split complex numbers. (There are all kinds of names going round, but the circular plane is also the split complex number plane for sure.)
As usual all that stuff has the conjugate wrong, but in the next wiki you see more or less the combined wisdom of the math community when it comes to expanding the complex plane to higher dimensions. (It is a dry desert, human brains are not that fit for doing math):

Once more: those people have got it wrong about how to find the conjugate and as such you can also find lots of pdf files about circular (or split-complex) numbers that say they are hyperbolic numbers.
The common fault is that they use the conjugate just as if you conjugate an ordinary complex number from the complex plane.

I remember I did that too for a couple of years until it dawned on me that we are only looking at the projections of the determinant; it has nothing to do with lengths, even in the complex plane it is not the norm of the complex number but it’s matrix representation and the determinant.

All stuff you find on this on the internet is nothing but shallow thinking.

End of this update, see yah in the next post.

In this post, number 50 by the way, I am trying to use as elementary math as possible in order to use the pull back map from the 3D circular number system to the complex plane.

With this the pull back map and the 3D circular number system are treated so basic that with only high school math and a crash course in the complex plane students can understand what I am doing.

That’s all, so basically all first year students in math, physics and chemistry could understand this post at the end of their first year on a local university.

The words above are only one reason to write this post; to be honest for me it took a long time to write down for the first time the coordinate functions for the 3D exponential circle.

And I never did give much solid proof for that these coordinate functions have indeed the properties as described. It all more or less came out of the sleeve as some kind of monkey trick.

All in all the goals of this post number 50 are:

1) To do the pull back of an exponential circle as simple as possible while
2) In doing so give some more proof that was skipped years ago.

This update is seven pictures long, each 550 x 775 pixels in size.
Hit the road Jack: 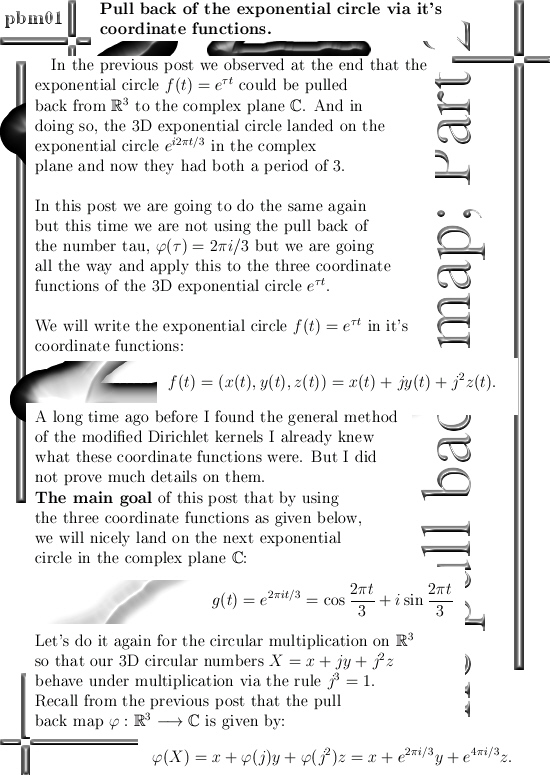 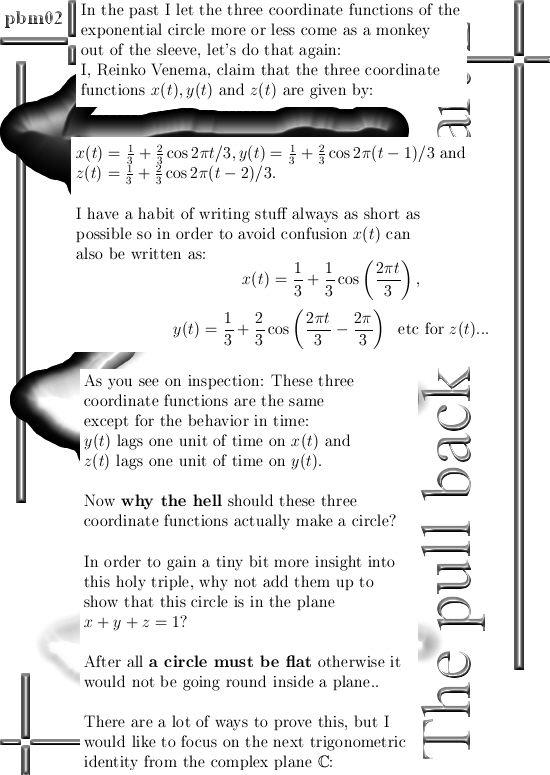 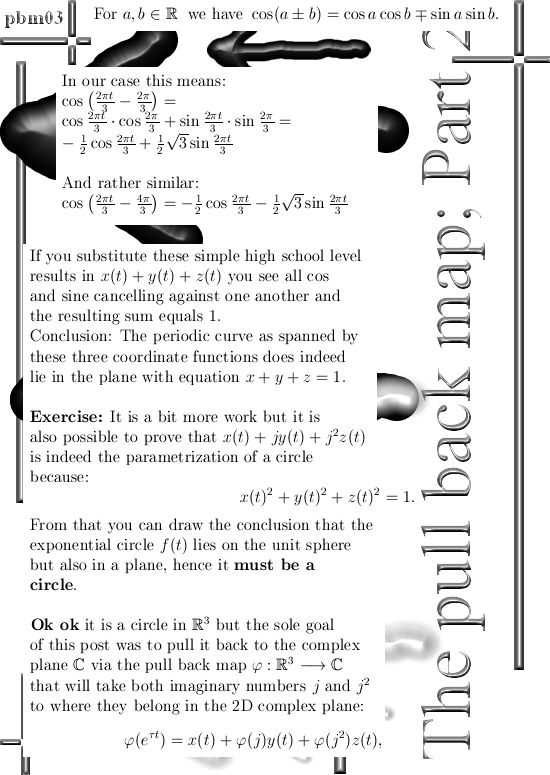 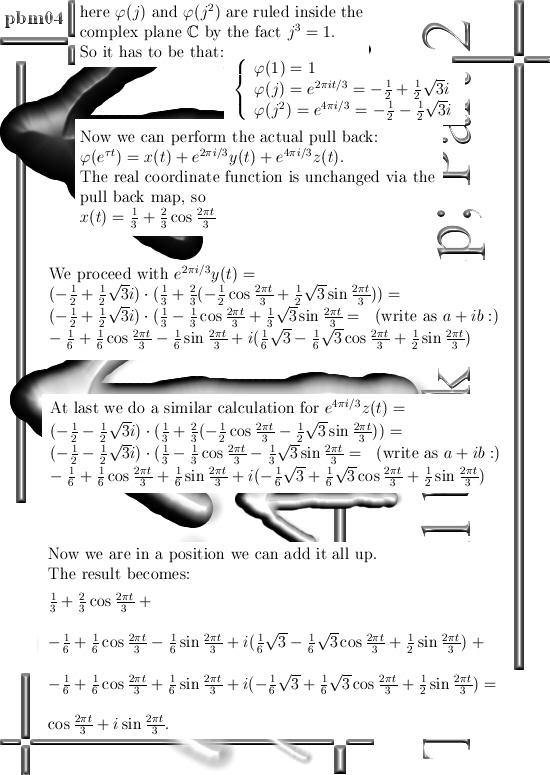 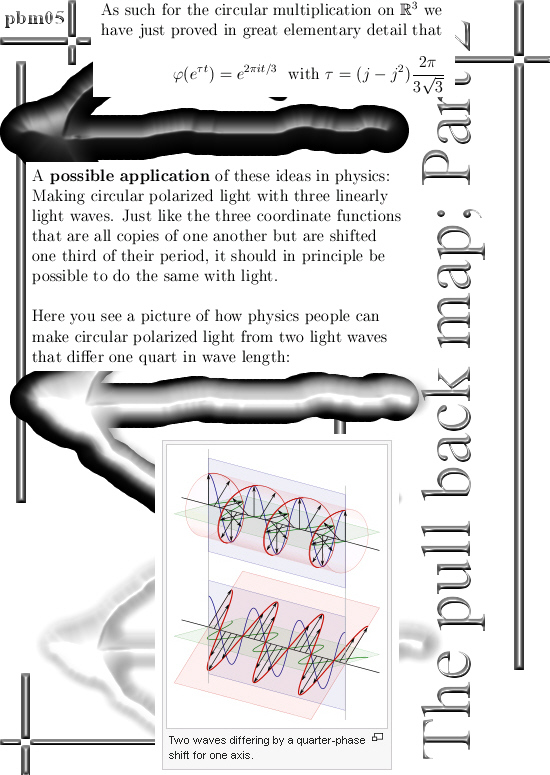 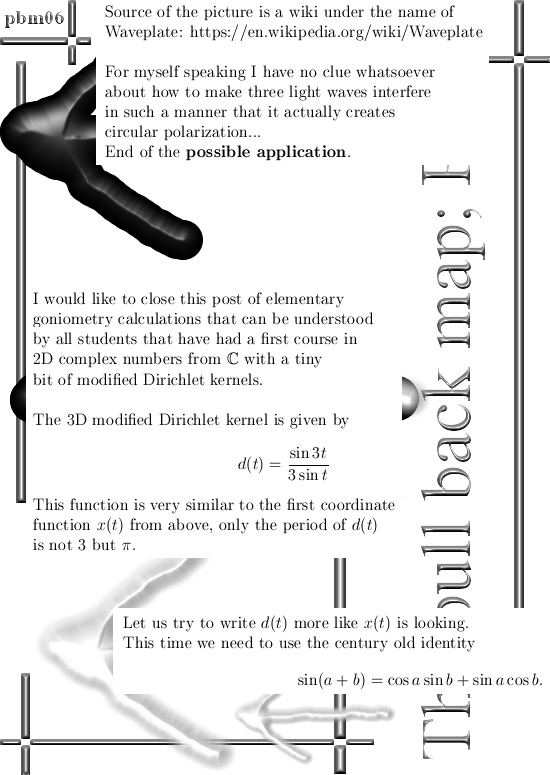 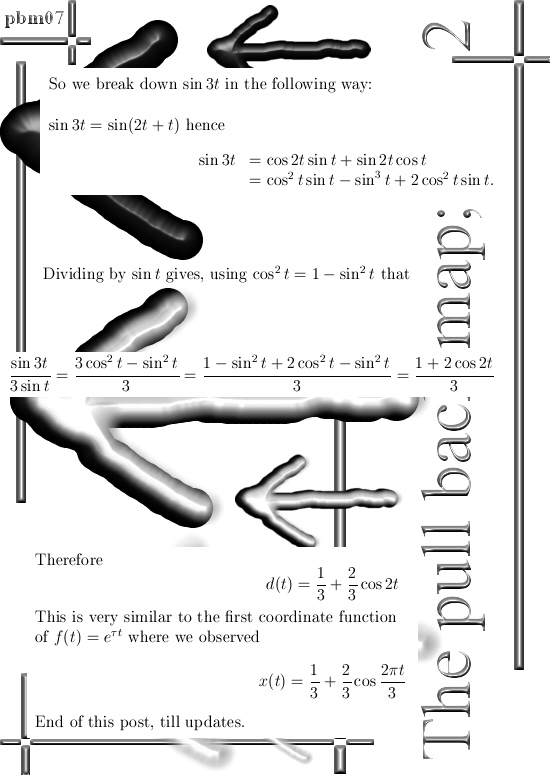 I think I have nothing more to say, so see you around my dear reader in post number 51.

In the previous post we had some stuff on the pull back map but also those links to complicated theorems. Therefore I tried to explain the inner workings of the pull back map that pull higher dimensional complex & circular numbers back to the complex plane in as easy to understand chunks as I could.

In the next post I only use advanced high school math (for my own country that would be the VWO education line, the classes 5 and 6) and for the rest any university student that has followed an elementary crash course on the complex plane.

I am very glad I could find such simple ways to pull back higher dimensional exponential circles and curves back to that goodie good old Euler formula that says stuff like e^it is related to the cosine and the sine functions.

All stuff is boiled down to things you can see in the teaser picture below, no new advanced 20th century math ideas, only using century old well known trigonometric equations and that is all…

Once more: Higher dimensional complex number systems are just there, it is a natural thing like the natural numbers like 1, 2, 3,  4, 5 etc are. Where the complex plane is something like a fish bowl, the higher dimensional complex & circular numbers are a big ocean.
But if you as a so called professional math professor can only swim your circles inside the fish bowl, can you survive the currents in this giant ocean?

No of course you can’t, so good luck with your future life inside the complex plane.

After this blah blah blah (remark the math professors are also extremely smart if you look at how much salary they suck in let alone the ‘research money’ they get to form global research groups that use at best two dimensional complex numbers) it is time for the teaser picture: 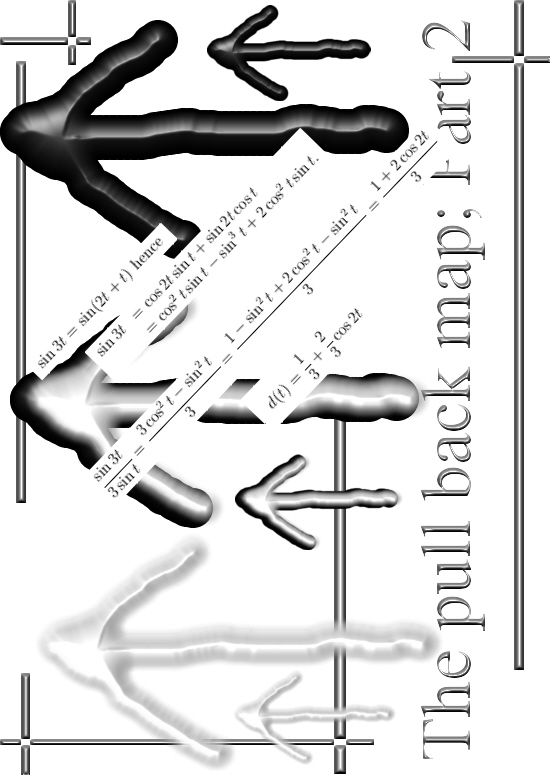 At last I would like to remark that the pull back map is on equal footage with the modified Dirichtlet kernels for my individual emotional system; I am glad I am still alive and can find stuff like this.