There is more than one candidate; the possible explanation of those solar loops via the rotating plasma under it is indeed very very nice.

But it is very hard to find experimental evidence for that, how to check that on the sun where there is one of those solar loops, the solar plasma underneath it is rotating?

This should be much more easy to verify experimentally. After all there is still plenty of magnetic tape around and the best way of checking if magnetic domains are suplusses of one of the two magnetic charges is much more handy if you have a flat surface like magnetic tape.

Furthermore at present day it should be possible to measure very small magnetic charges. After all in most computers there still are spinning hard disks that use magnetism as the basic information storage.

Also in that line of thinking, the domain walls shoud have surplusses of electron pairs that all are spinning around to compensate or neutralize the magnetic forces they feel. An important clue to that lies in the fact you cannot really move or transport domain walls in a wire as the engeneers of IBM tried with making their nano wire racetrack memory.

This year we heard more or less nothing from IBM with progress into the concept of nano wire racetrack memory. Yeah yeah, the price of not understanding electron spin is huge, if we could have fast computer memory that uses very little energy that would be great…

This year I also gave up on my fantasies of trying to make an official publication in some physics yournal. I don’t think such a publication will ever pass the peer review that those scientific yournals use. Those peer review people just want the electron is a magnetic dipole and that’s it. So I did not try that this year nor will I try next year.

Not that I am aginst peer review. Suppose there would be zero peer review and think for example medical scientific publications. They would be filled with all kind of weird benefits that homeopathy therapy has, or the healing of your chakra’s with mineral chrystals… Of course we cannot have that. As such there must always be the so called peer review…

Ok, the word count counter says 500+ words written so I have to stop writing.

Here is the link to what I self more or less consider as the best improving insight on my behalf on the behavior of all things magnetic. It is from 7 July this year:

Ok, that was it. Happy new year.

I found one of those video’s where the Fourier series is explained as the summation of a bunch of circles. Likely when you visit a website like this one, you already know how to craft a Fourier series of some real valued function on a finite domain.

You can enjoy a perfect visualization of that in the video below:

Only one small screen shot from the video:

Oh oh, the word count counter says 80+ words. Let me stop typing silly words because that would destroy my goal of the ‘shortest post ever’. Till updates.

It is the shortest day of the year today and weirdly enough I like this kind of wether better compared to the extreme heat of last summer. Normally I dislike those long dark days but after so much heat for so long I just don’t mind the darkness and the tiny amounts of cold.

In the previous post we found a general way of finding all inverses possible in the space of the 4D complex numbers. Furthermore in the post with the new Cauchy integral representation we had to make heavy use of 1/8tau and as such it is finally time to look at what the inverse of tau actually is.

I found a very simple way of calculating the inverse of the number tau. It boils down to solving a system of two linear equations in two variables. As far as I know reality, most math professionals can actually do this. Ok ok, for the calculation to be that simple you first must assume that the inverse ‘looks like’ the number tau in the sense it has no real component and it is just like tau a linear combination of those so called ‘imitators of i‘.

This is a short post, only five pictures long. I started the 4D complex number stuff somewhere in April of this year so it is only 8 month down the timeline that we look at the 4D complex numbers. It is interesting to compare the behavior of the average math professor to back in the time to Hamilton who found the 4D quaternions.

Hamilton became sir Hamilton rather soon (although I do not know why he became a noble man) and what do I get? Only silence year in year out. You see the difference between present day and past centuries is the highly inflated ego of the present day university professors. Being humble is not something they are good at…

After having said that, here are the five pictures: 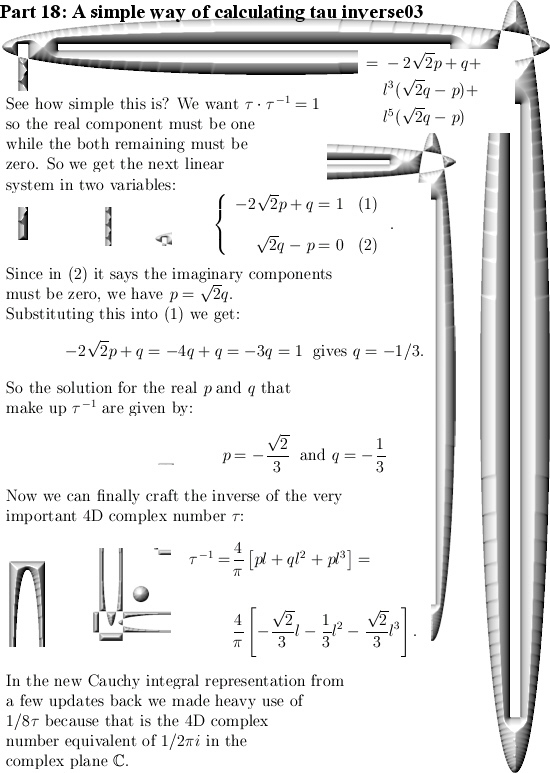 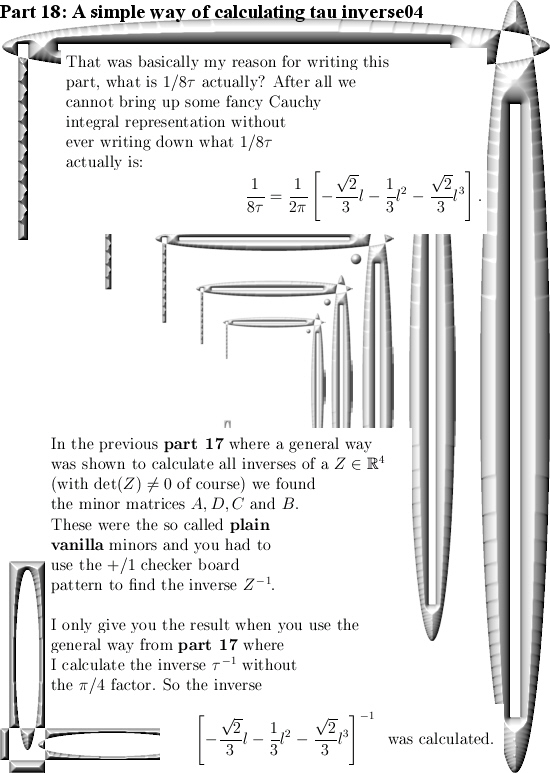 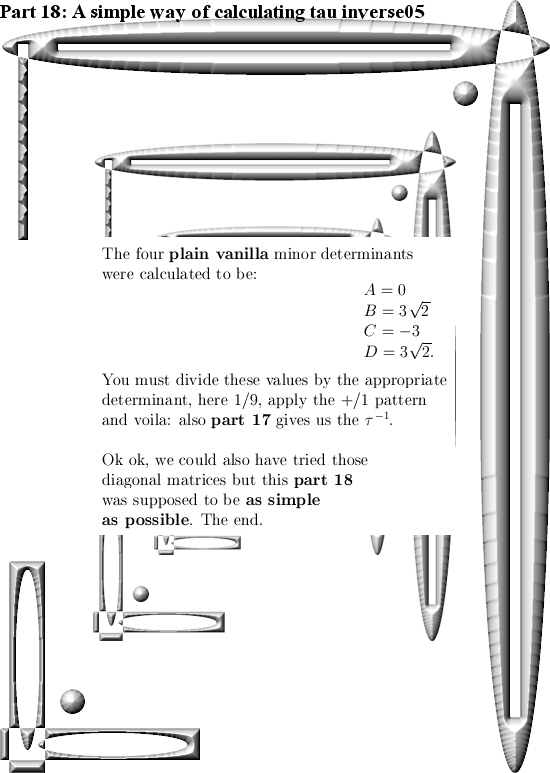 Well, have a nice Christmas & likely see you in the next year 2019.

Ha, a couple of weeks back I met an old colleague and it was nice to see him. We made a bit of small talk and more or less all of a sudden he said: ‘But you still can always do this’. And he meant getting a PhD in math.

I was a bit surprised he did bring this up, for me that was a station passed long ago. But he made me thinking a bit, why am I not interested in getting a math degree?

Beside this, if I tried it in the years 1990 and 1991 with very simple: Here this is how the 3D Cauchy Riemann equations look… And you look them in the eyes, but there is nothing happening behind those eyes or in the brain of that particular math professor. Why the hell should I return and under the perfect guidance of such a person get a PhD?

I am not a masochist. If complex numbers beyond the complex plane are ignored, why try to change this? After all this is a free world and most societies run best when people can do what they are good at. Apparently math like I make simply falls off the radar screen, I do not have much problems with that.

After having said that, this update Part 17 in the basics to the 4D complex numbers is as boring as possible. Just finding the inverse of a matrix just like in linear algebra with the method of minor matrices.

Believe me it is boring as hell. And after all that boring stuff only one small glimmer of light via crafting a very simple factorization of the determinant inside the 4D complex numbers. So that is very different from the previous factorization where we multiplied the four eigenvalue functions. From the math point it is a shallow result because it is so easy to find but when before your very own eyes you see the determinant arising from those calculations, it is just beautiful. And may be we should be striving a tiny bit more upon mathematical beauty…

This post is nine pictures long in the usual size of 550×775 pixels. 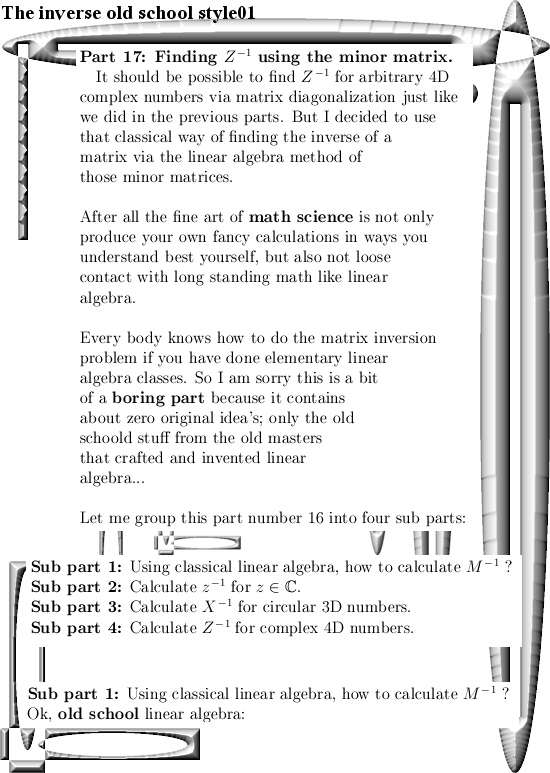 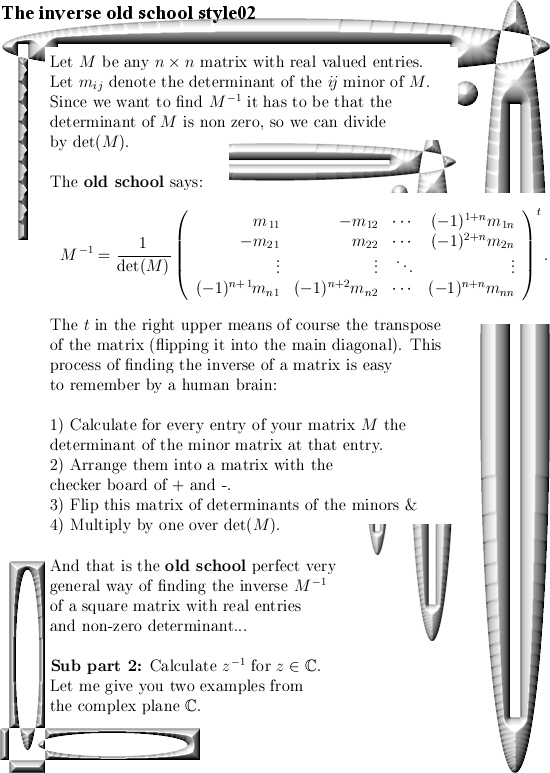 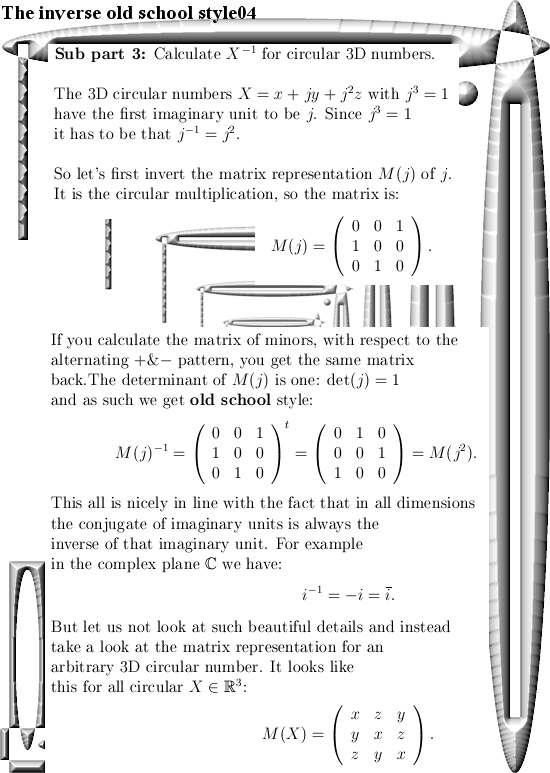 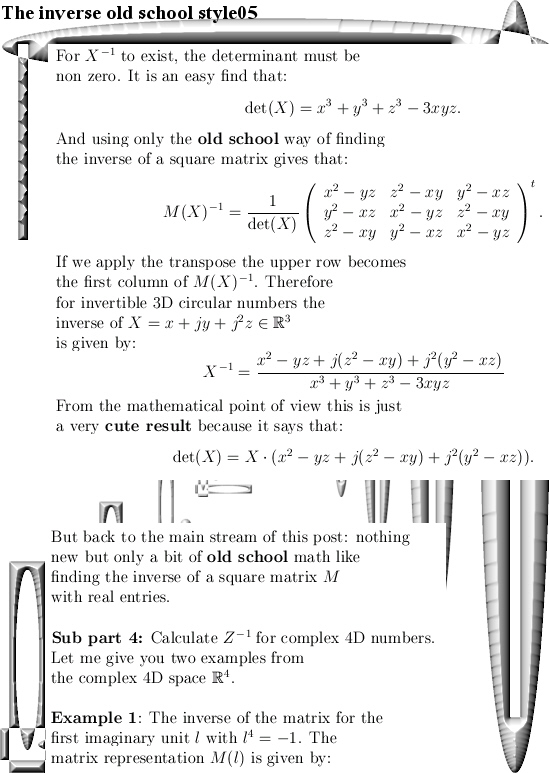 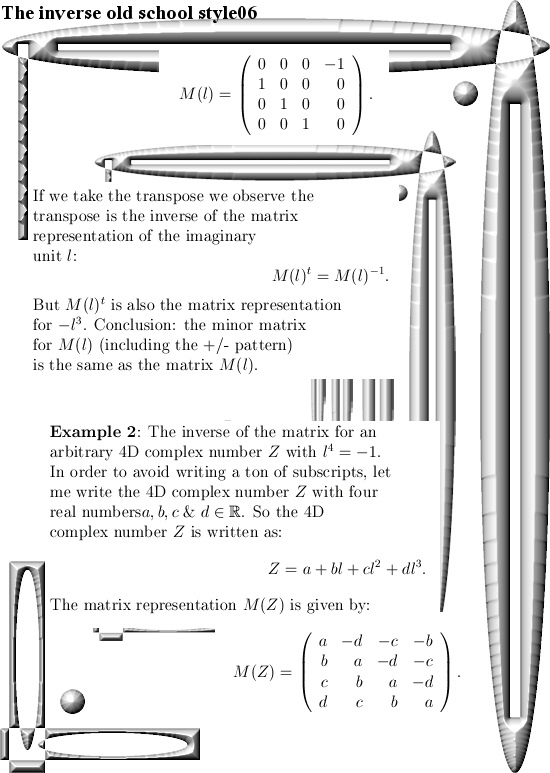 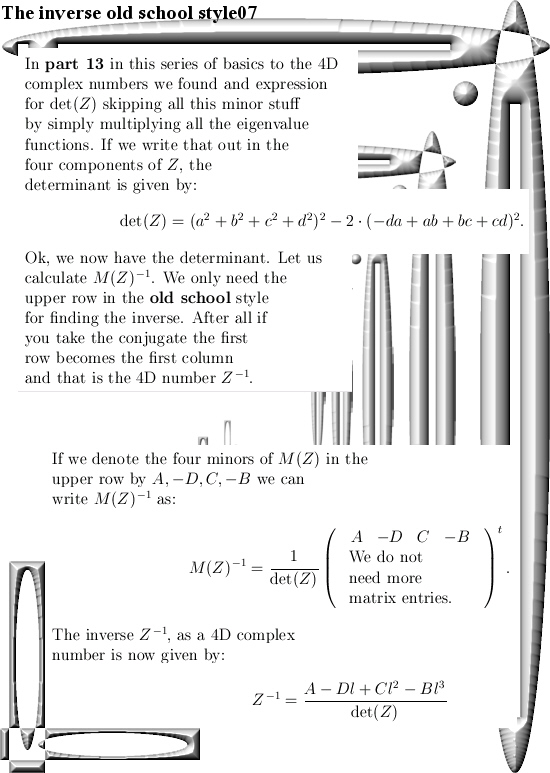 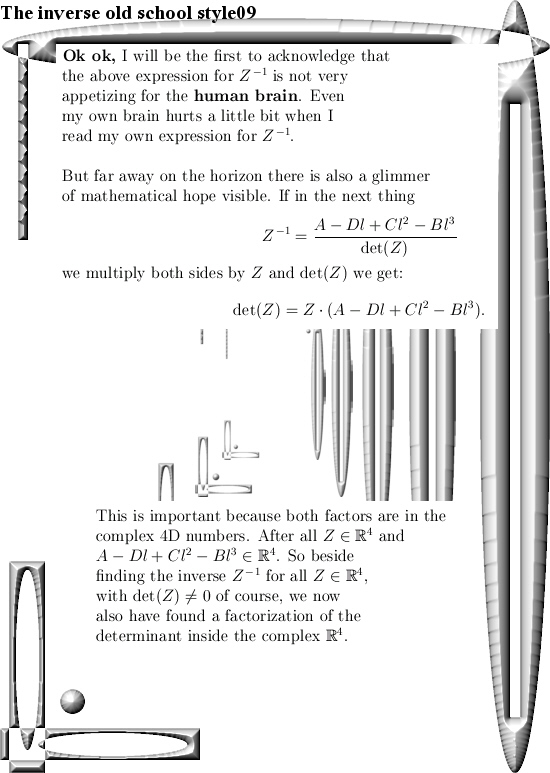 As an antidote against so much polynomials like det(Z), with 2 dimensions like a flatscreen television, you can do a lot of fun too. The antidote is a video from the standupmaths guy, it is very funny and has the title ‘Infinite DVD unboxing video: Festival of the Spoken Nerd’. Here is the vid:

End of this update, see you around.

So a small appendix, here it is: 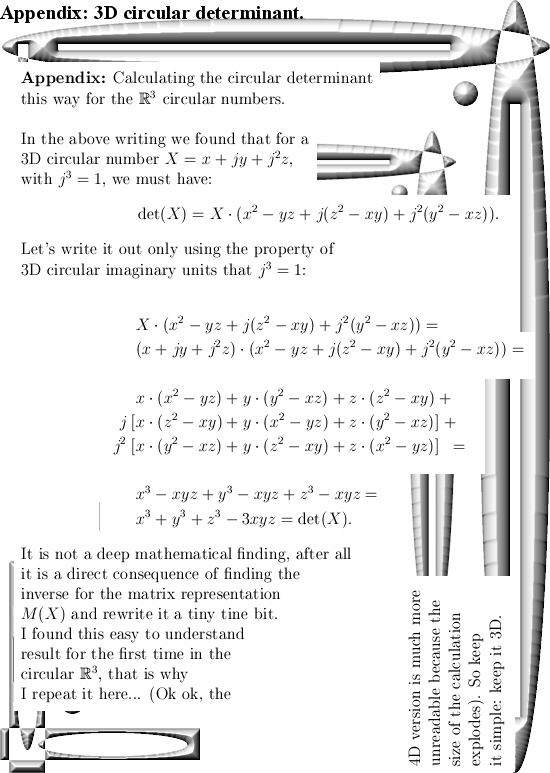 And now you are really at the end of this post.

In the next post let’s calculate the inverse of the 4D complex tau number. After all a few months back I gave you the new Cauchy integral representation and I only showed that the determinant of tau was nonzero.

Ok, drink a green tea or pop up a fresh pint, till updates.