There is a Youtube channel named the science asylum. It is run by a guy that makes your head tired but for a few minutes it is often nice to watch. In the next video he tries to explain magnetism, both electro-magnetism and permanent magnets.

Here is the video:

The video guy tries to explain permanent magnets via the concept of angular momentum. As far as I know physics now this is indeed the way it has historically evolved. Now a lot of physics folks think that the unpaired electrons somehow go around the nucleus and as such create a magnetic dipole moment, other place more emphasis on electrons being the basic dipole magnets and if they align all conditions for possible permanent magnets are there. Of course beside electrons also the so called magnetic domains need to align and the official version is that this is more or less the way some materials like iron can be turned into permanent magnets.

In my view, when permanent magnets are manufactured it is the applied external magnetic field and the slow slow cooling down from above the Curie temperature that ensures the magnet becomes ‘permanent’.

If during the cooling down a NS external magnetic field is applied, the permanent magnet will come out as a SN magnet.

I still haven’t found it after all these years, but if it comes out that permanent magnets have the same orientation as the applied external magnetic field during fabrication, I can trash my theory of magnetic charges and finally go on with my life…

But there are plenty of problems more with the standard model version of electrons being magnetic dipoles. Here is a screen shot from 4.35 minutes into the video from the crazy asylum guy and it contains so called quantum numbers. 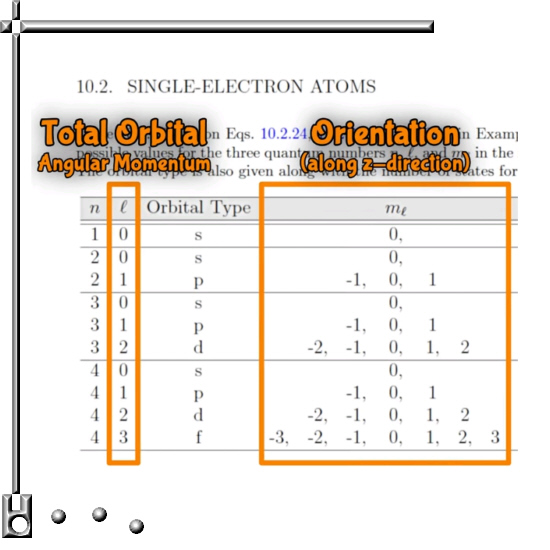 The title in the picture might look a bit confusing because the only single-electron atom in the universe is the hydrogen atom. Likely the author means the number of unpaired electrons in some atom.

You observe two quantum numbers that are holy inside quantum mechanics:
The so called ‘Total orbital angular momentum’ number l and something weird because it is only along the z-axis direction m_l.

And that is precisely what the m subscript l number does…

So I still have to find the very first fault in my simple idea that electrons just carry one of the two possible magnetic charges.

Ok, let’s leave it with that. Have a nice set of quantum numbers or try to get one.

May be looking at chaotic guys makes me chaotic too, but reading back what I wrote yesterday I think it is better to explain the ‘anti alignment’ a bit more because I explained it far too confusing I just guess.

I made a schematic sketch of it, you see two coils that make a long lasting constant magnetic field and in that field a hot piece of iron is slowly cooling down. An important feature of iron is that the four unpaired electrons are in the inner shells, this is a consequence of the so called aufbau principle.

Here is the sketch: 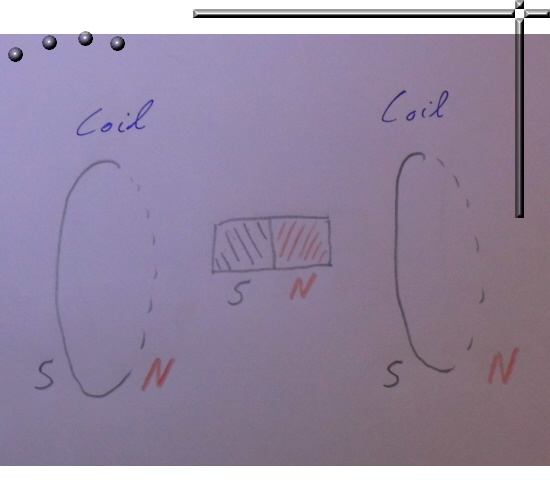 So my basic idea of manufacturing permanent magnets is the fact that during the long cool down the unpaired electrons can settle in those inner shells inside the electron could of the iron atoms.

Furthermore it has to be that the chrystal structure metals like iron make is such that the individual iron atoms cannot rotate. It is fixed in place. And with the unpaired magnetic charge carrying electrons in place after the long cool down, that is why your permanent magnet is more or less permanent:

Small surplusses of south charged electrons should be at the left & vice versa a bit more north magnetic charge at the right as sketched above.

That just does not happen. Last spring I made a small toungue in cheek ‘experiment’ with that where I placed my stack of most strong neodymium magnets against two of my most weak magnets. It was all fixed in place over 24 hours, but after all that time my two most weak permanent magnets exposed the same behaviour as before.

So no electron was flipped and for me that was one more reason to say farewell to the idea of electrons being magnetic monopoles.

Here is a link to that very simple toungue in cheek experiment, I hope it is so simple that physics professors will vomit on that…

Ok, I have to stop this post because it is over 1100 words long and that is far beyond the attention span of professional physics professors.

In the begin of this series on basic and elementary calculations you can do with 4D complex numbers we already found what the number tau is. We used stuff like the pull back map… But you can do it also with the method from the previous post about how to find the matrix representation for any 4D complex number Z given the eigenvalues.

Finding the correct eigenvalues for tau is rather subtle, you must respect the behavior of the logarithm function in higher dimensions. It is not as easy as on the real line where you simply have log ab = log a + log b for positive reals a and b.

But let me keep this post short and stop all the blah blah.

Just two nice pictures is all to do the calculation of the 4D complex number tau: 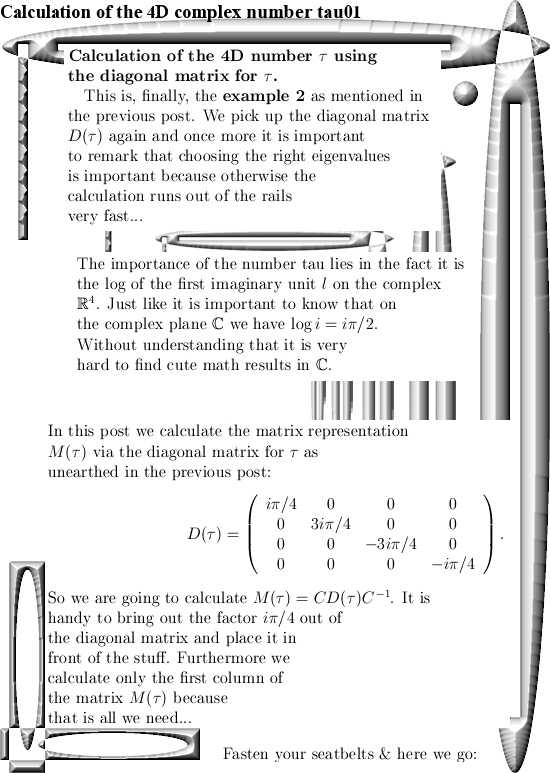 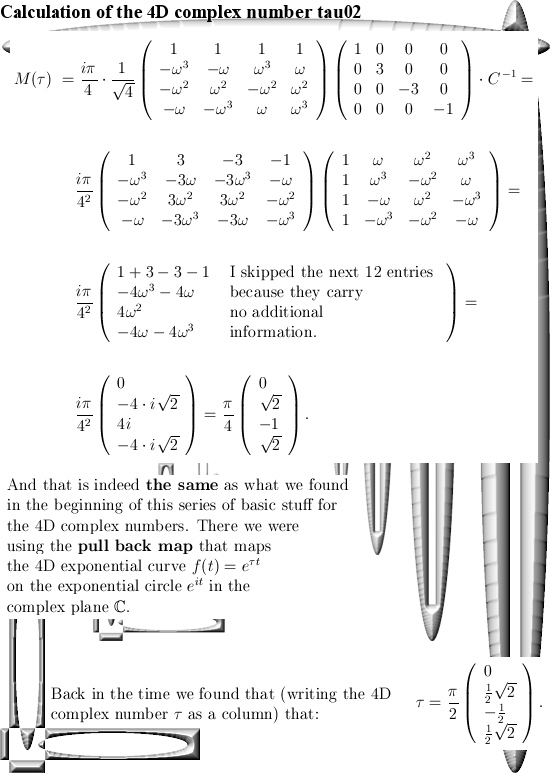 (Oops, two days later I repaired a silly typo where I did forget one minus sign. It was just a dumb typo that likely did not lead to much confusion. So I will not take it in the ‘Corrections’ categorie on this website that I use for more or less more significant repairs…)

This website is now about 3 years old, the first post was on 14 Nov 2015 and today I hang in with post number 100. That is a nice round number and this post is part 15 in the series known as the Basics for 4D complex numbers.

We are going to diagonalize all those matrix representations M(Z) we have for all 4D complex numbers Z. As a reader you are supposed to know what diagonalization of a matrix actually is, that is in most linear algebra courses so it is widely spread knowledge in the population.

Now at the end of this nine pictures long post you can find how you can calculate the matrix representation for M(l) where l is the first imaginary unit in the 4D complex number system. And I understand that people will ask full of bewilderment, why do this in such a difficult way? That is a good question, but look a bit of the first parts where I gave some examples about how to calculate the number tau that was defined as log l. And one way of doing that was using the pull back map but with matrix diagonalization you have a general method that works in all dimensions.

Beside that this is an all inclusive approach when it comes to the dimension, in practice you can rely on internet applets that use commonly known linear algebra. Now if you are a computer programmer you can automate the process of diagonalization of a matrix. I am very bad in writing computer programs, but if you can write code in an environment where you can do symbolic calculus in your code, it would be handy if that is on such a level you can use the so called roots of unity from the complex plane. After all the eigenvalues you encounter in the 4D complex number system are always based on these roots of unity and the eigenvectors are too…

This post number 100 is 9 pictures long, as usual picture size is 550 x 775 pixels.
In the next post number 101 we will use this method to calculate the matrix representation of the number tau (that is the log of the first imaginary unit l).

Ok, here are the pictures: 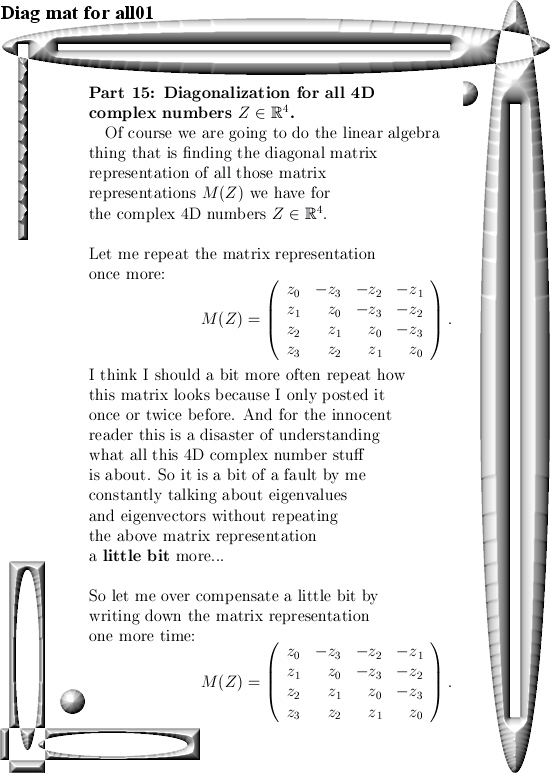 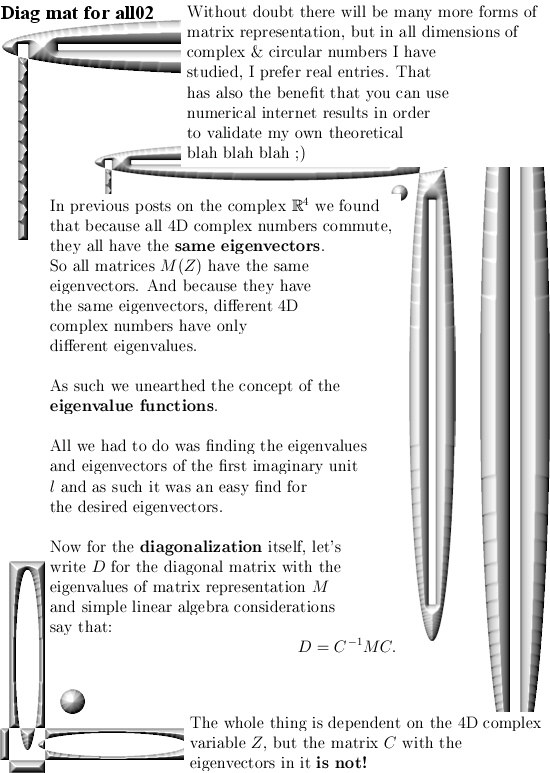 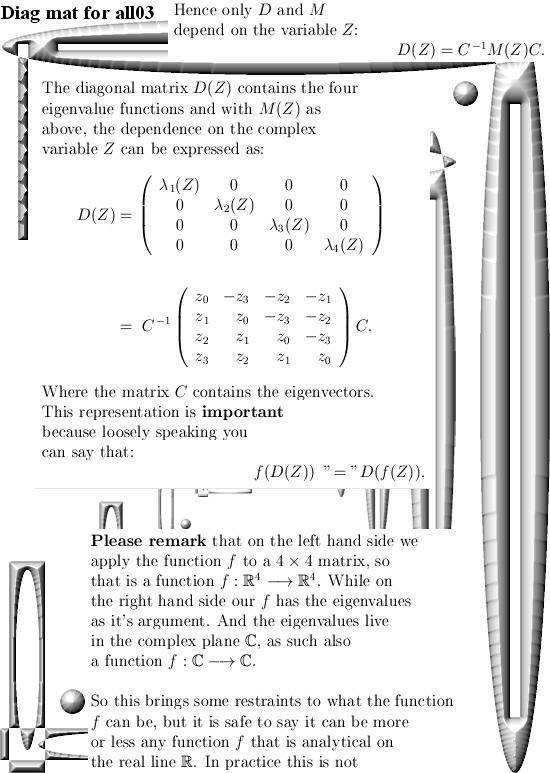 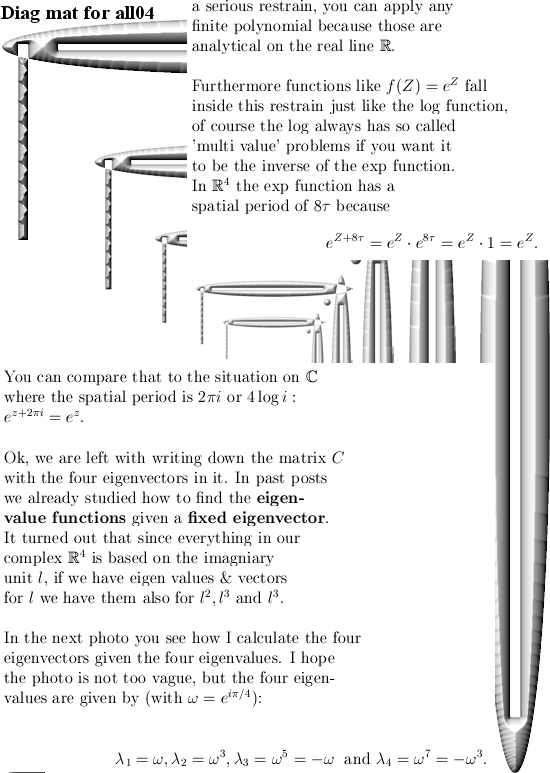 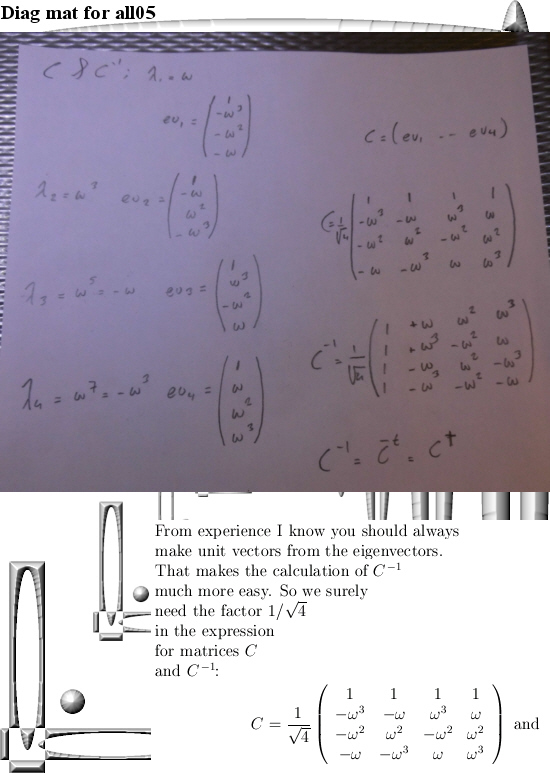 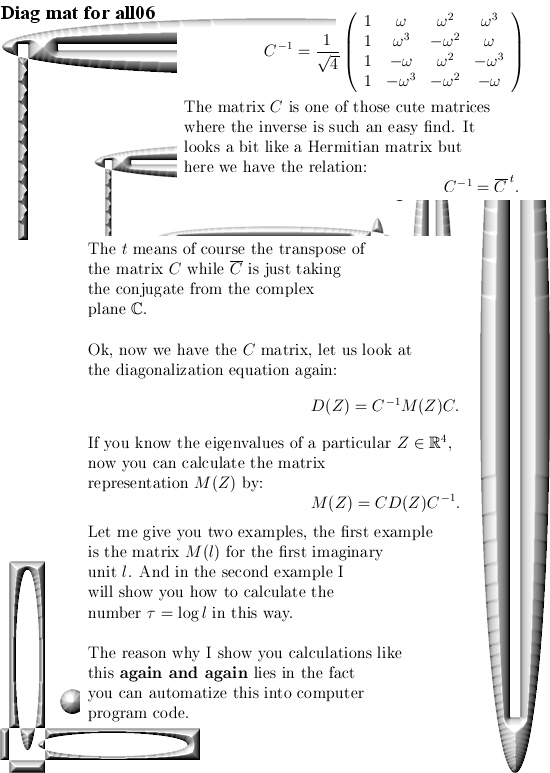 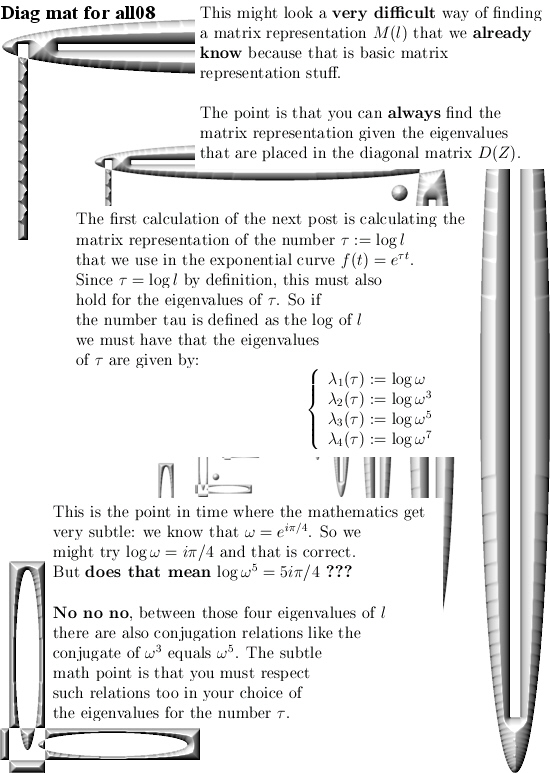 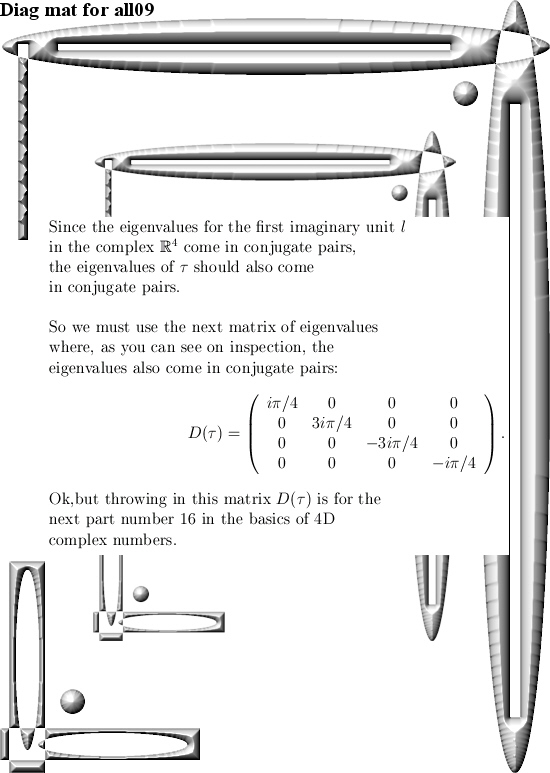 That´s it, in the next post we go further with the number tau and from the eigenvalues of tau calculate the matrix representation. So see you around.