About a full week late all is now finished. Also there was that problem of the hacked webpage; the third update on the Schrödinger equation was loaded and loaded with all kinds of weird comments. But if you did read those comments you could see the overwhelming majority was not written by humans but were posted by bots.

Anyway in the end even advertisements for online sales of viagra and stuff surfaced so I took an evening to see if this could be repaired. For the time being it is not possible to post comments although before it was also impossible but that was due to an unknown technical fault…

In this update we dive into the [a, r, t] coordinate system and this is very similar to using polar coordinates in the complex plane only in 3D we are moving a half-cone along a line and as such sweep through the entire 3D space. In short it goes like this:

With a we control how far the cone is moved from the origin,
with r we denote the distance from a particular point X to the top of the cone and finally,
with t we figure out how much we need to rotate stuff using an applet for the log of a matrix.

I also give once more the coordinate functions of the exponential circle so that you are able to find coordinates on the main cone (that has the origin as it’s top) for yourself.

It is important to remark I did my best to keep it as simple as possible so I also concentrate on a few worked examples so it is not just theory but also how to find these new coordinates. In relation to other posts like the Schrödinger equations posts, I think this new coordinate system is definitely of interest to people from quantum physics and chemistry that try to calculate those atomic and molecular orbitals.

This update is relatively long: 14 pictures of size 550 x 775 pixels and for the first time I use unshrunk jpg pictures because year in year out the bandwidth of internet connections is still rising fast so why remove fine detail from jpg pictures any longer?

I hope you learn something new, here are the pics: 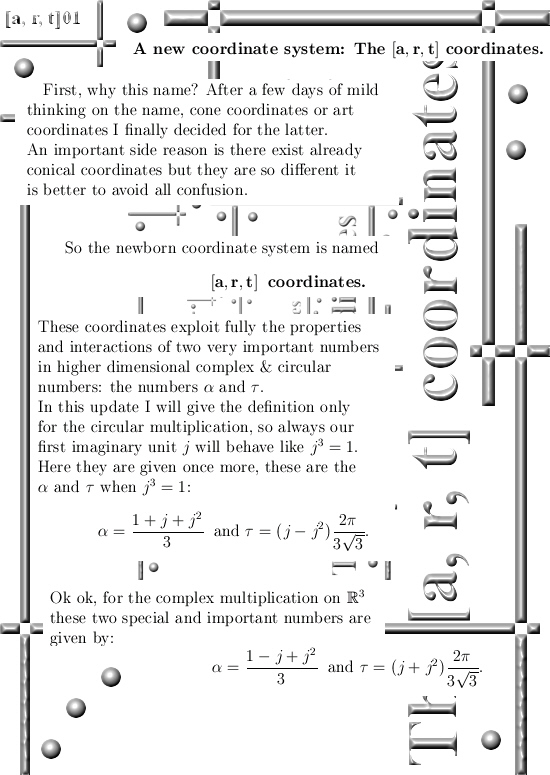 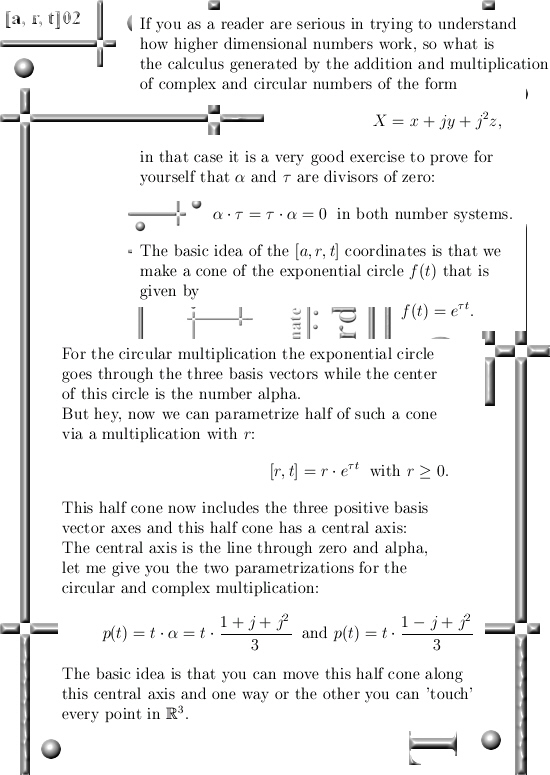 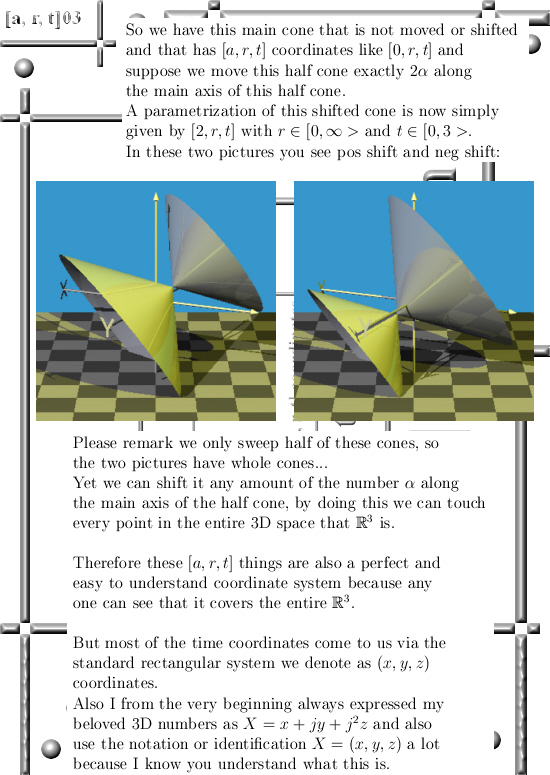 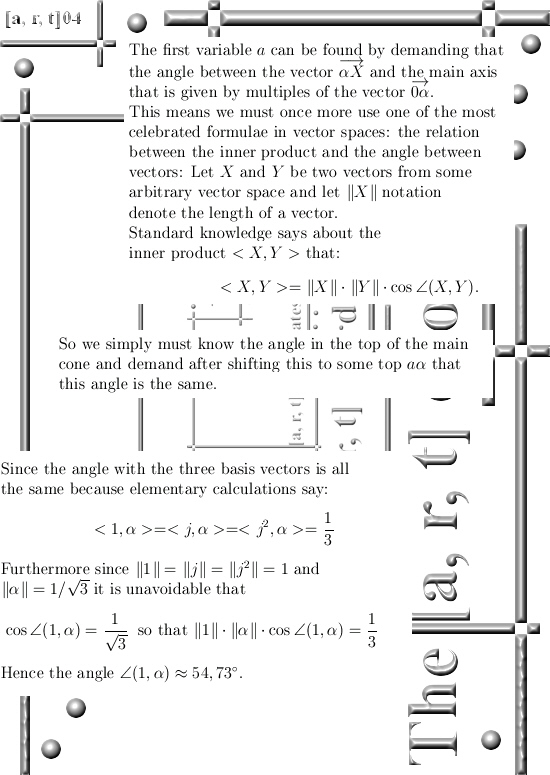 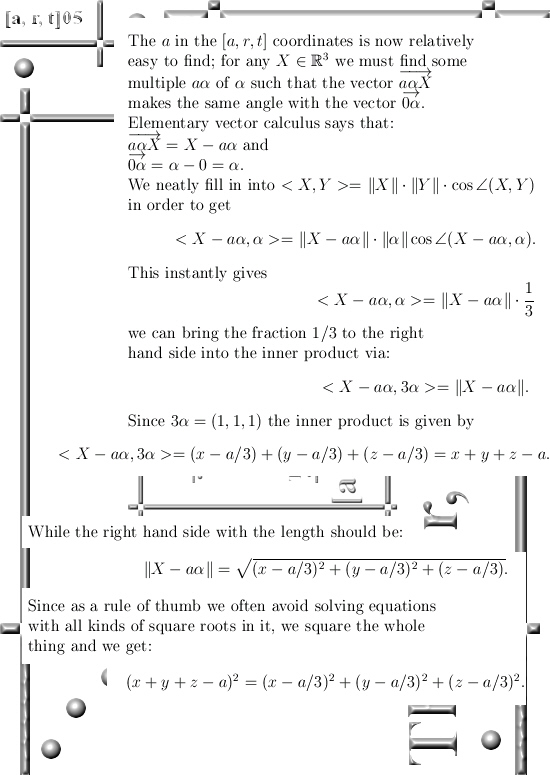 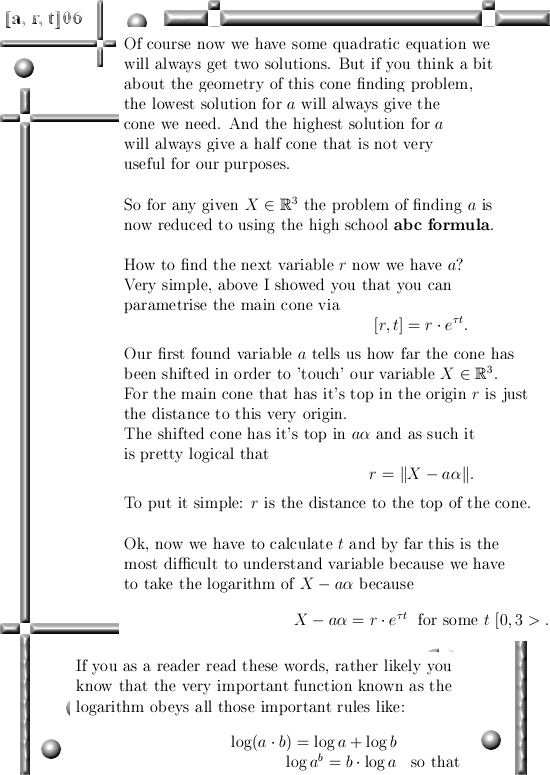 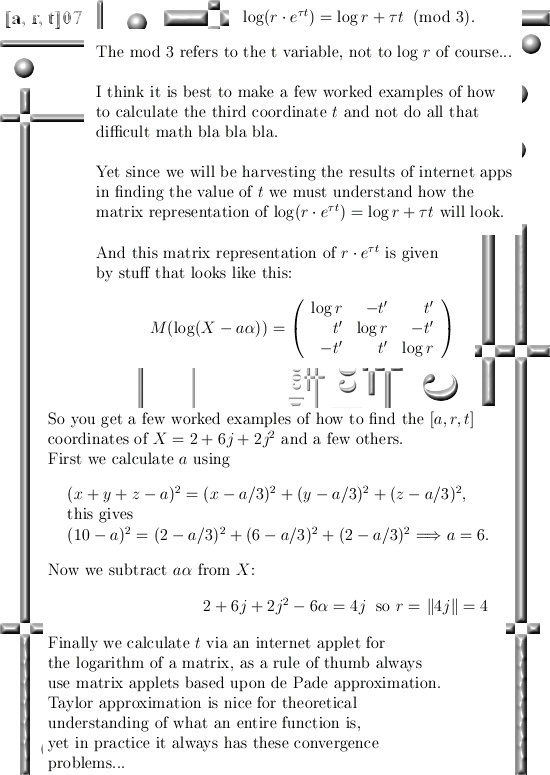 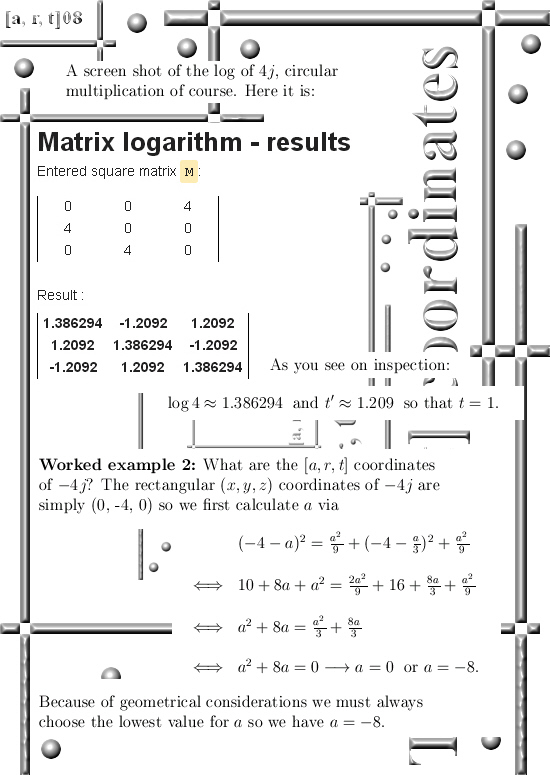 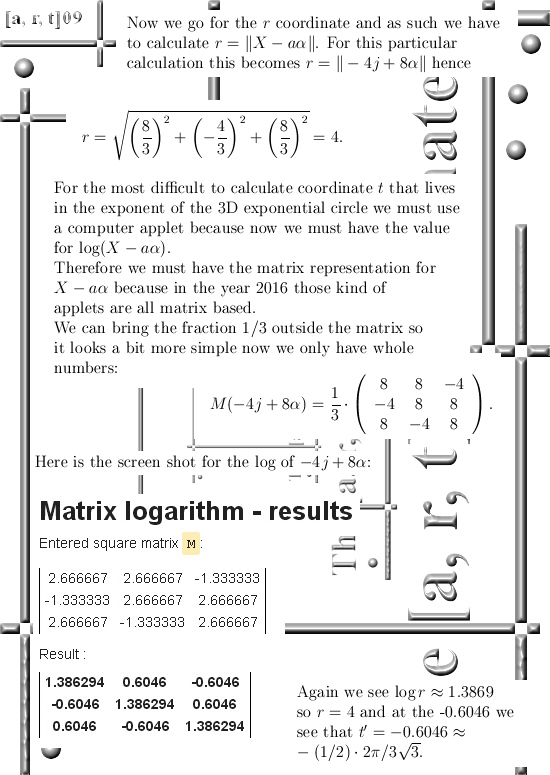 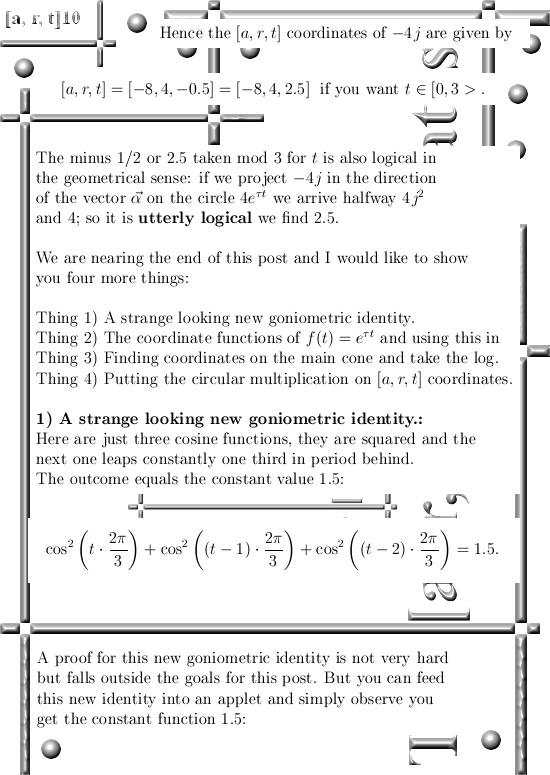 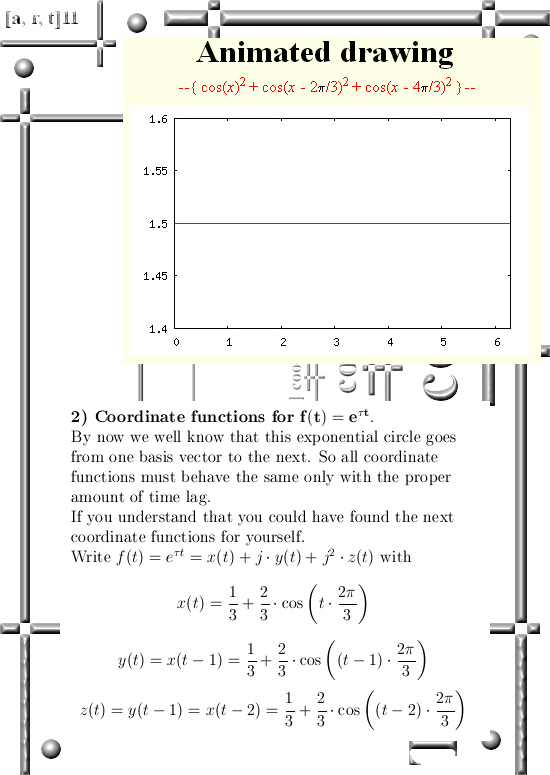 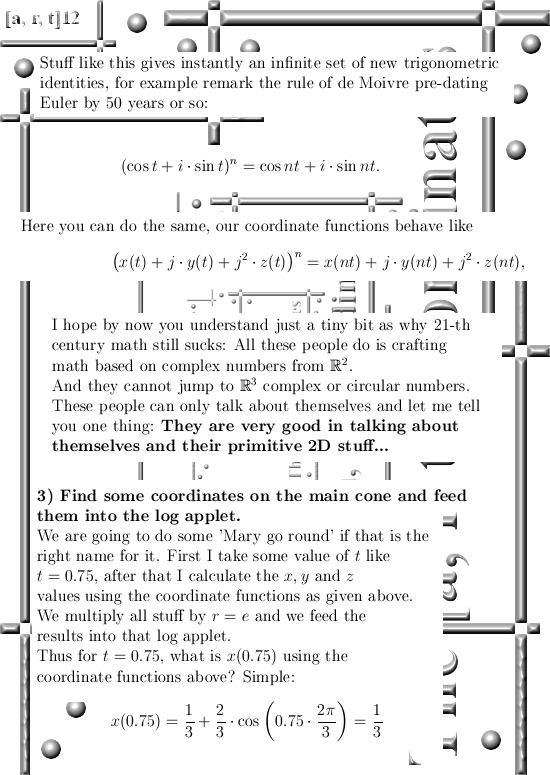 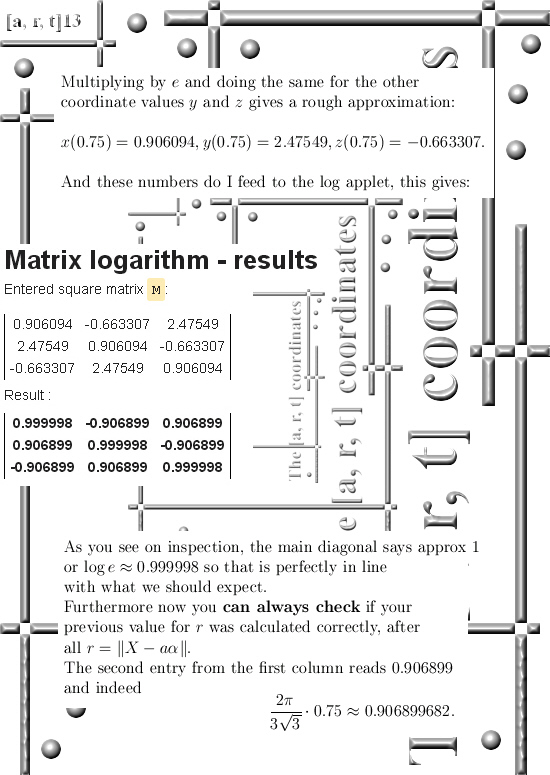 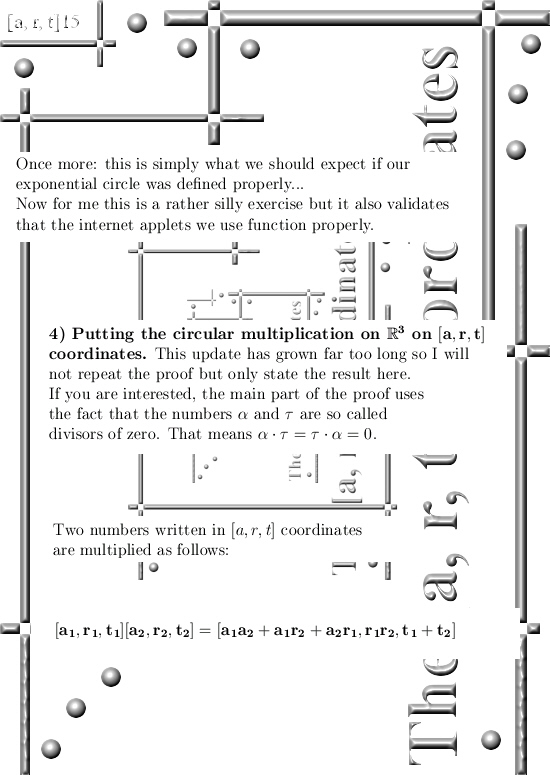 Ok, that was it. For myself speaking I more or less expect everything to be the same:
Professional math professors from around the globe will keep on talking about their own research and just how important it is to use complex numbers from the complex plane.

And a good applet for the logarithm of matrix representations is also handy:

And last but not least is a proof for the latest formula above: the circular multiplication on the [a, r, t] coordinates can be found on the other website:

About four days ago suddenly the comment section of the third post on the Schrödinger equation got activated and about 100 comments did stream in every day.

Now about six months ago when I started this new website I did allow for comments made by readers but it never worked properly. So, what my own life concerns, I was in that perfect super-position of being a friendly person (allowing people to comment) and being a psychopath that sees little value in communicating with normal people (not allowing people to make comments).

Anyway to make a long story short: This evening I made some upgrades to this website and I hope that I will not see any longer all those weird spam for buying viagra online or looking at advertisements for videos from lady boys.

Not that I am against viagra: If you are a stupid person and you keep on eating bread several times a day and as a result your arteries begin to clog, you can go to your medical doctor.

Your medical doctor will prescribe you viagra and will not tell you ‘stop eating that fucking bread’.

And if you are a retard, you will buy viagra online…

Ok, after having said that in the next week I will finally publish a relatively long update on the new [a, r, t] coordinate system. It is all finished on some very minor details so the process of turning this into a new set of pictures can begin.

The one kind is for every body directly to understand ‘this is a typo’ and the brain pops up what should be the correct thing standing there.

And there is that kind of typo that is a disaster in people trying to understand what this stuff actually means.

I am sorry I messed things up, but it is like picture six on the previous update on the length of complex numbers that must have been a root cause of much disunderstanding.

In the next picture I show you the correction: in that matrix it now reads log r instead of only r.

Why I was that stupid a few weeks ago is non of your business, but by now stuff is repaired and we no longer have this horrible mistake around any longer… 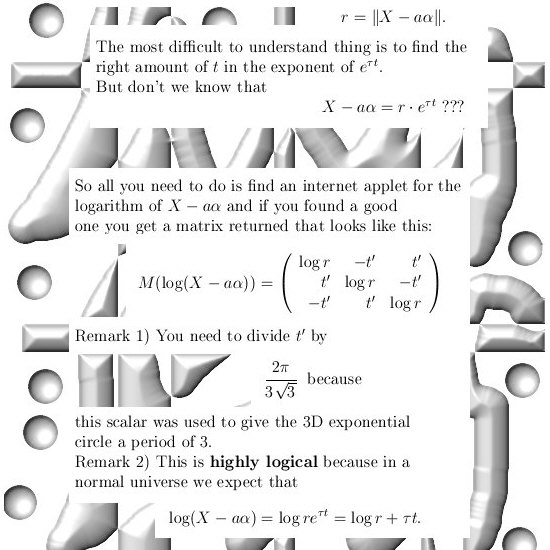 Ok, let’s leave it with that. Till updates.

Oh oh all of a sudden all kinds of things that are highly emotional and non-mathematical arise. Stuff like a close but young family member still being suicidal and a young neighbor that was arrested by the local police and is now in the intensive care of the local psychic hospital.

And to finish it off, all of a sudden after waiting far too many years I decided to press some child neglectance/abuse charges related to the boy in the intensive care.
And, just a detail: If you have a very severe spychotic behavior like the boy in the IC of course this could have a pure biological foundation.
But if your mommy is a full blown psychopath this does not do much good either…

Yet I have to say that although this stuff is highly emotional I think I like it.
After all these years finally there could be a small chance of fundamental change for those kids suffering from the psychopath mommy…

We will wait and see.

On the math front I have not been sitting on my hands but stuff is not finished by far.
So the new coordinate system has about one week of delay.
On the naming of the coordinate system it is just about thinking about the name for a new baby and I am more and more leaning to the name that is also a functional description:

Why not? The three letters a, r and t are how you need to calculate them in that very order.
And the word art stands for stuff that is supposed to be beautiful but also make you think a bit more. As the days go by the less I am in favor of naming this new coordinate system with names like:

No, why not choose [a, r, t] coordinates as the name for this new coordinate system?

On the other website I have posted the first update that studies how the length of two 3D circular numbers change when you multiply them. So given the reactangular coordinates (a, b, c) of A and (x, y, z) of X, what is the length of the product AX?

Here is the link:

Ok let me end this update, till the next post.

With great success I was able to kill my frustration. There are many ways to combat heavy upcomming frustration, for example you could go running against the wind until you are so heavily exhausted that all frustration is gone.

But this time I did it differently: Within a timespan of at most three minutes I finally wrote down that calculation that I avoided for so long, for so many years. And within this small time frame suddenly I was bombarded by sphere and cone equations telling me that story I should have discovered so many years ago.

Within this unloading of a huge amount of frustration I discovered how the length changes when you multiply two 3D cokmplex numbers, say X and Y.
All these years I never understood properly what drove the length of the product XY.

And this result eased my mind, I was no longer frustrated that all those incompletent people get boatloads of money every month while I live in relative poverty compared to those saleries.
And I went to work and I discovered an amazingly strange but also very easy to understand completely new coordinate system for 3D space.

It is not for any ordinary 3D vector space, you must equip it with either the complex or circular multiplication, but it is so beautiful that I hope it will survive in the long run.

I have not decided on a name yet, for the time being I name it ‘special coordinates’. Since cones play such a major role the name ‘cone coordinates’ might be the right thing to do.
But there are already Conical Coordinates yet they act like the common point of 3 non parallel planes; it is the intersection of two cones with a sphere…

All in all I will post the stuff on length preserving/shrinkage/extra growth on the other website in page 4 on the higher dimensional complex numbers.

So that’s the planning for the time being, till updates.