When you for the first time encounter magnets (when you were a child or so) it is clear they are magical things. When you as a reader are still young and later in life you get kids too, always make sure there are a few magnets in their collection of toys. (And also ensure there is enough simple plain version of Lego, later in file this is good for their geometrical insights.)

Let me first summarize how permanent magnets are made:

The existence of such a Curie temperature is also in favor of my version of how permanent magnets work but let me build it up slow and steadily and not bring you into confusion.

Now the professional professors know that it are the unpaired electrons that are the root cause of permanent magnetism. Here is a picture of how those professionals think it is, all magnetic metals have so called domains inside their crystalline structure and this is more or less schematic how it is supposed to work: 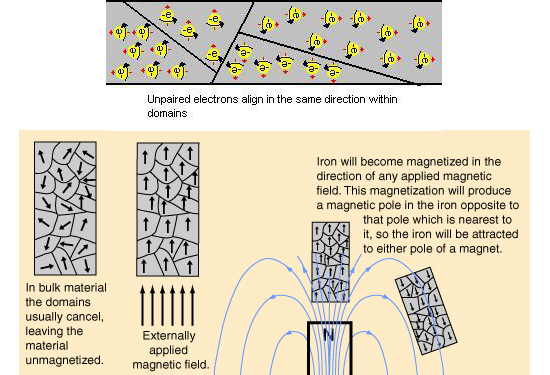 In the upper part of the picture you see that even after a full century a lot of people still think the electrons are actually spinning, but why should electrons spin frantically with a precise speed anyway? Also in the above picture you see the habit of using vectors to represent magnetic dipole moment, that is ok only not on the level of individual electrons.

What all those metals that can be permanently magnetized have in common is very easy to understand: They have lots of unpaired electrons below the outer electron shells. 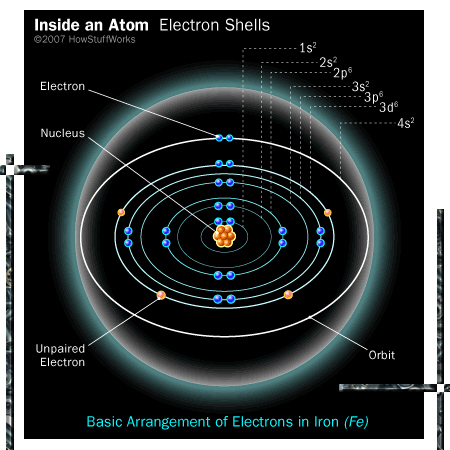 You see the unpaired electrons inside the iron atom.

Now you understand why there is such a thing as Curie temperature; if heated enough the unpaired electrons will be removed from the iron atom.

And if electrons carry magnetic charge, you understand as when making permanent magnets while cooling them slowly down inside a strong applied outside magnetic field ensures the electrons will land there where it like to be.

And this, my dear reader, is an explanation of how permanent magnets work without the need for electrons that are glued into place. Electrons like to move around in their orbitals so once more if they were magnetic dipoles they could not hold on to a permanent state of magnetism…

And so on and so on, my easy to understand insight the magnetism of the electron is much better compared to one century of physics professors.

Let’s leave it with that, thanks for your attention.