It has to be remarked that the physics folks are very persistant to keep on trying to find the so called Dirac monopole. How this has come to be is still a miracle to me. After all if the electron has one electric charge and for the rest it is a magnetic dipole, it would look naturally to look for a particle that is a magnetic monopole and an electric dipole at the same time…

But I have never heard about such an investigation, it is only the Dirac magnetic monople and that’s it.

Here is a quote from sciencenews dot org:

If even a single magnetic monopole were detected, the discovery would rejigger the foundations of physics. The equations governing electricity and magnetism are mirror images of one another, but there’s one major difference between the two phenomena. Protons and electrons carry positive and negative electric charges, respectively, but no known particle has a magnetic charge. A magnetic monopole would be the first, and if one were discovered, electricity and magnetism would finally be on equal footing.

Magnets with a single pole are still giving physicists the slip
https://www.sciencenews.org/article/magnetic-monopoles-single-pole-physics

Comment on the quote: Because in my view I consider the electrons having one electrical charge and one of two magnetic charges, I think we have a nice equal footing of electricity and magnetism… (End of the comment.)

Back to CERN and stuff. Last month it came out that the MoEDAL experiment has failed in the sense that no magnetic monopoles were observed. Here is a small screenshot from the preprint archive stuff: 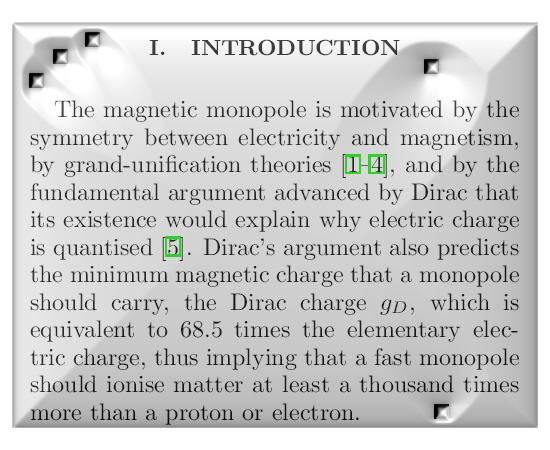 Search for magnetic monopoles with the MoEDAL forward trapping
detector in 2.11 fb−1 of 13 TeV proton-proton collisions at the LHC.

After a bit of searching I found back this beautiful video, coming from CERN, explaining how to find magnetic monopoles. It is clear they never ever studied the electron.

Does it have electric charge too and why should that be?

In my view where the electrons carry both electric and magnetic charge, a magnetic monopole with zero electric charge just does not exist.

Ok, let me bring this post to an end by observing that at CERN they were not capable in the year 2017 of detecting the magnetic monopole as it should exist following the lines of thinking like Paul Dirac once did.

Sorry CERN folks, your failure to find magnetic monopoles your way does not prove that electrons are indeed carrying magnetic charge. It just makes it a little bit more plausible that they do…

So my dear CERN folks, thanks for publishing your failure because for me it is another tiny quantum move into the direction of accepting the electron as it is.

Yesterday I finally looked into the so called Majorana equation and it is easy to find where the Dutch universities have gone wrong. At the technical universities in Delft and Eindhoven they use electrons together with a hole that supposedly has a positive electrical charge so that the overall combination of electron and hole is electrically neutral.

And it is very easy to explain: If I am in the right and electrons also carry magnetic charge, the above constellation of an electron and a hole is not magnetically neutral like, for example, the Cooper pairs of electrons in super conductivity.

No, I do not think that in Delft they found the elusive Majorana fermion. But time will tell because if this way of quantum computing will keep on failing or never get anywhere, I can use that as a future reason of why electrons cannot be magnetic dipoles.

Here is a wiki about the Majorana equation, already at equation number 2 I am lost in the woods because the mass m suddenly goes to the other term in the equation.

And here is a short video from Youtube where the technical university of Eindhoven explains how they will try to prove the existence of the Majorana fermion as a quasi particle. The video is from 23 August 2017, that is only four and a half months ago.

From the wiki we have this information, what the differential operator with the ‘Feynman slash’ does is actually not important at all. The nice thing here is to understand what they try of find here:
A particle (or a collection of particles, the quasi particles) where all charge is compensated. Apperently the mass related to charge comes in with opposite charge and indeed if you can find solutions to such a wave equation you might hope to find it one day.

That was more or less what I had to say about the Majorana equation.
Of course I also wish you a happy new year! Till updates.