In the previous post where I tried to demonstrate that it is impossible to accelerate electrons via exposing them to non-uniform magnetic fields contains a tiny error of 1/2.

I did forget to multiply the Bohr magneton with the electron spin number of 1/2.

Is this a serious problem? Not for me, because now the magnetic dipole moment of the electron is halved you need double the gradient of the applied magnetic field. So we need a spatial gradient of only 10 million Tesla per meter in order to accelerate the electron by 1/10 of the gravitational force here on earth.

I have decided to leave the pictures in the previous update unchanged because if a fault of forgetting a factor of 1/2 leads to a rejection by so called professional physics professors, that only shows these people are garbage to begin with.

Here is the correction that I will not show in the previous post: 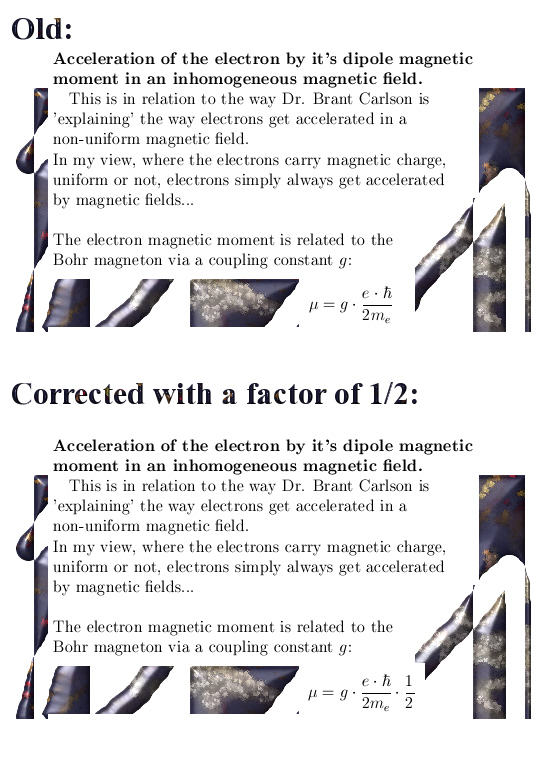 Lately I viewed a video of some folks who did throw a bureau chair into a medical MRI machine of 3 or 6 Tesla stationary magnetic field. The magnetic field of the MRI machine pulled at the chair with a force of about 1000 kg (ok that would be 10 thousand Newton).

And on top of that, in the original Stern-Gerlach experiment it were not loose unpaired electrons that did get accelerated but silver ions that are many thousands times more massive as our poor unpaired electron that makes the entire silver ion moving…

So instead of 10 million Tesla / meter, 10 billion Tesla per meter should be more reasonable in order to explain the results of the Stern-Gerlach experiment from the year 1922. (That is if you base your theories on the assumption that elementary particles like electrons cannot be magnetic monopoles.)

End of this correction, please take your time in order to understand the content of the previous post because that is much more important! Till updates.