Now I was watching a few video’s from Microsoft where they explain the subject of topological quantum bits. The Dutch based university of Delft is also participating in that project of making topological quantum bits and the researchers from Delft are thinking they have found a quasi particle named the Majorana particle. This Majorana particle seems to be it’s own anti-particle and according to Leo Kouwenhoven such a quasi particle is comprised of a hole and an electron…

The fact they claim this stuff is it’s own anti particle struck me as odd, it is well known that if a particle meets it’s anti particle the result is a violent annihilation of both particles and it is very very hard to imagine that if two holes and two electrons meet there will be violence…

Anyway this made me think of what actually happens when in those high energy particle physics experiments like in CERN we observe the creation of an electron and a positron. The positron is the anti particle of the electron.

And even in such an elementary thing it makes no sense the electron is a magnetic dipole. It might look logical that if one particle has spin up the other created particle must have spin down.
But if we assume there is spinning around an axis, both the electron and the positron must rotate into the same direction, this is a direct violation of the principle of conservation of angular momentum.

So if electron spin is spinning around some axis and we want to preserve the total amount of angular momentum, they should be spinning in opposite directions but that would create two equal magnetic spins and that is also nonsense.

That makes sense while the professional physics standard explanation does not make sense. Here is a link to the stuff involved in reason number 51:

So all those so called professional physics professors have it straight in their face: how do those electrons get accelerated. I think it is the magnetic fields from Jupiter that do this, just like on the sun and so but before our precious ppp’s will arrive at the same conclusion we will be many centuries later… (Or not?)

In the next picture you can see how this was told in the news as you can find it on Youtube channels like Scishow (often more show than science but anyway they serve some part of the public). 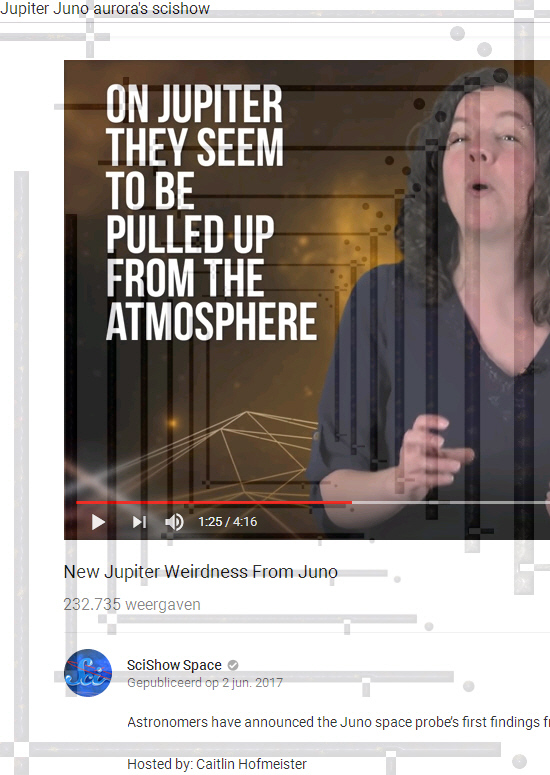 Oh oh Catlin Hofmeister, they are not pulled up but expelled by the magnetic field of Jupiter… Reason number 52:

Ok let’s say goodbye for the moment, till updates in the next post!