Often when I am out I try to do a bit of math while riding my noble iron horse known as that old bicycle. The disadvantage of doing math on your bike is that one the one hand you cannot go very towards complicated stuff where you need pencil and paper but on the other hand you can get deep by getting some good idea’s.

And only when you get home and you have access to pencil & paper you can check if the stuff can be written out and see how your idea’s survive in the battle for attention from your brain.

After the previous post about magnetism I was only thinking ‘Why not do some pure 3D complex number stuff again’? But the math well is a bit dry lately when it comes to 3D complex numbers. May be this has a bit to do with the total and utter silence from the so called ‘professional math people’ who excel in staying silent…

It still is a good read I think:
Wirtinger derivatives and the factorization of the Laplacian.

Wirtinger derivatives and the factorization of the Laplacian.

So there was little use in writing that stuff out again when there is, as usual, never ever any signal from the ‘professionals’ who rather likely are busy spending their too large salaries on stuff they think is important…

In another development I came across the latest video from the Mathologer, it is very interesting because he claims that the famous Euler identity is not from Euler at all.
But Mr. Mathologer comes up with what is one of the famous Euler stuff, anyway a long long time ago it was one of the details that made Euler famous was finding what the sum of squared reciprocals was: 1/1^2 + 1/2^2 + 1/3^2 + ….

Over 25 years back I did the same calculations as the Mathologer invites you to so let me share the video with you. At first it looks a bit difficult but all you need to do is think about how to write out those infinite products as sums and after that you apply the age old trick of equalling the left and right side of the equation.

Here is the vid:

May be in a future post we will be diving a bit deeper into this because Mr. Mathologer has nice news upon who found what but he skips all that stuff like how to write the entire functions from the complex plane as (infinite) products.
Furthermore he does not explain as why the given infinite product would be valid anyway… 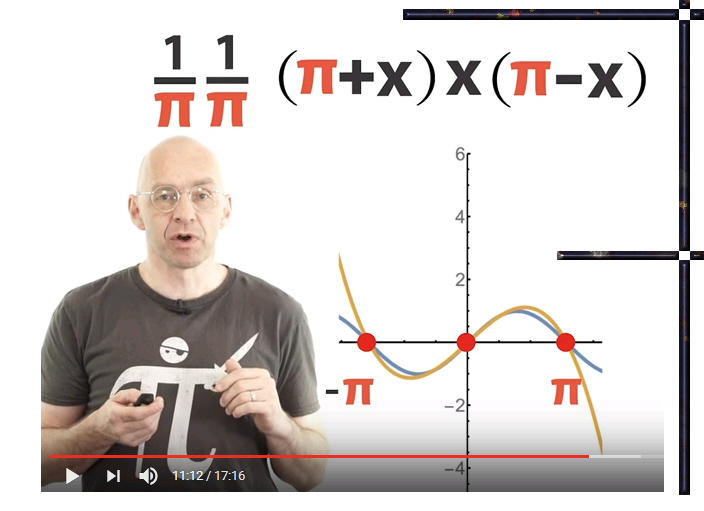 Ok, may be in a next post I will be diving a bit deeper in all those kinds of infinite products.
Or may be it will be something completely different, anyway till updates.

By sheer accident while I was only watching a video about why there is such a break between higher math and higher physics, I came across some weird stuff from a guy named Edward Witten.
And the talk was about so called Seiberg-Witten monopoles, so my interest was aroused because I cannot allow plagiarism of course.

Anyway to make some long story short, Mr. Witten is also Mr. String Theory. You know that kind of theory that is impossible to validate in physical experiments so it is the opposite of what I do because if electrons carry magnetic charge it could be found in more and more experiments…
But the Witten guy wrote about Dirac operators and once more my interest was aroused and I looked it up: Dirac operators are differential operators D and if you square them you get the Laplacian…..

Here is a short wiki about the stuff involved:

Basically when you try to find operators D that square to the Laplacian it is more like ‘operator problem looking for a fitting math space’ while in my above factorization of the Laplacian it is a math space (3D complex and circular numbers) that want a factorization.
In the wiki you also observe in example number 4 that Clifford algebras are named a possible candidates, that is true but a few remarks are at their place.
That is the content of the next two small pictures: 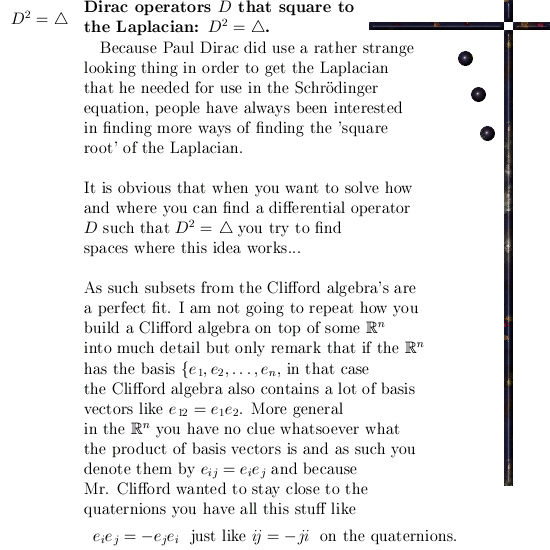 Ok, this wasn’t how I more or less planned the next update but when idiots come along talking about massless monopoles beside having deep fun I also have the right to expose the names of the idiots in question…

Let’s leave it with that, till updates my dear reader.