In the beginning of this month I wrote in just 20 minutes of time a new reason as why electrons cannot be magnetic dipoles. I just came across a few news articles on a few of those websites popularizing science, it was about the amazing strength of the Jupiter aurora’s as discovered by the Juno spacecraft.

Only later I found out that writing stuff in just 20 minutes of time is asking for trouble, I completely skipped the fact that the Jupiter aurora’s are partly caused by other things than the aurora’s on earth. The explanation done by the official scientists is that on earth the vertical magnetic field is accompanied by an electric field and that this electrical field is what accelerates the electrons down to earth.

Here is a link with a short description of the stuff involved:

Interesting quote from the beginning of the Nature article:

The most intense auroral emissions from Earth’s polar regions, called discrete for their sharply defined spatial configurations, are generated by a process involving coherent acceleration of electrons by slowly evolving, powerful electric fields directed along the magnetic field lines that connect Earth’s space environment to its polar regions.

Comment: This is something I definitely need to study much more because electrons only get accelerated by electrical fields if the earth would be positive. But if my little theory of electrons accelerated by magnetic fields is true, in that case over the life of the solar system the sun would have ejected more electrons than protons and all planets with a magnetosphere would have taken in more electrons than protons.
Hence the sun should be positively charged and the earth should be negatively charged.

And indeed, the earth has a negative charge. It goes under the bizarre name of fair weather potential. Here is the link:

So the last word is definitely not spoken on that detail; we also must take into account that for professional physics professors they can only think of electron acceleration as done by electrical fields. Just look into any standard course in plasma physics and you always only see that Lorentz force thing. And of course this is directly related to the fact that the pppp (pppp = professional plasma physics professors) consider the electron a magnet dipole, there is no experimental proof for that but over there anything goes as long as the Maxwell equations are followed…

And life, life will go on. 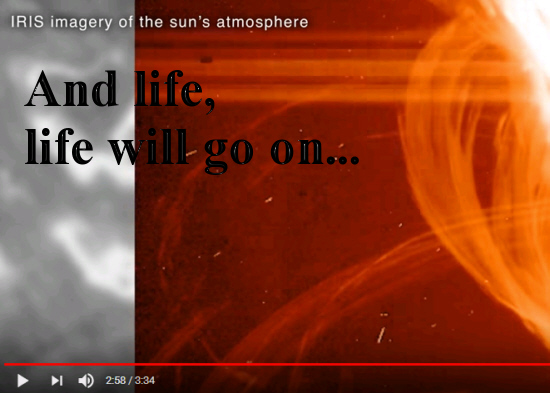 May be my next reason as why electrons cannot be magnetic dipoles is once more the temperature of the solar corona. That is another unsolved problem for about 75 years now and indeed it is very strange to observe that the surface of the sun is like 7000 degrees Celsius while the solar atmosphere (the corona) goes from like one million to four million degrees Celsius.

The picture above came from the next video:

ScienceCasts: The Mystery of Coronal Heating

And it makes me wonder; there are so much video’s out there where solar plasma is ejected out and it gets accelerated before your eyes but still the pppp keep on hanging to their stuff like only electrical fields can do this…